Midlake: half of these guys are in Banquet 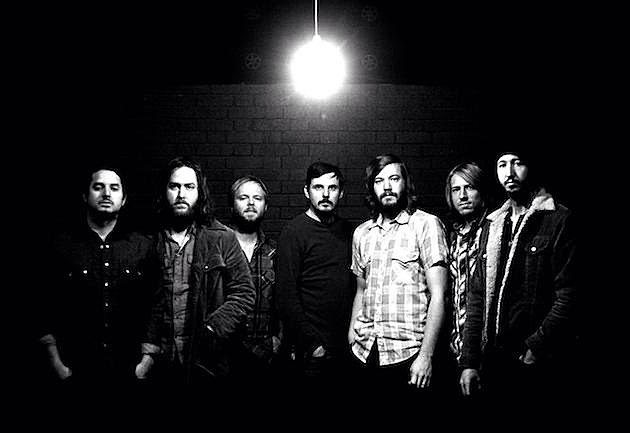 Jason Lytle is a busy guy. In addition to the new Grandaddy record that's being recorded currently, he's also part of a new supergroup called Banquet that also features his pal Ben Bridwell of Band of Horses, Alex Kapranos of Franz Ferdinand, Fran Healy of Travis as well as four members of Midlake (specifically Eric Pulido, McKenzie Smith, Joey McClellan and Jesse Chandler). Pulido had the idea for the group and jokingly refers to Banquet as a "poor man's Traveling Wilburys." The Dallas Observer spoke with Pulido and Lytle about the project:

"It all started with a boy and a dream," Pulido says wistfully. One of his dreams is coming true, though: He has put together what may be one of the most indie supergroups ever. "I was surprised people said yes." He says that to begin he simply sent an email to a few musicians he admired to see if they'd be interested in a collaborative music group. "It's a humbling and cool experience to share something like this with some of your musical idols who are also nice people," Pulido adds.

"To tell you the truth, I'm a little mystified what the whole thing is myself, which is fine," Lytle says. "I was asked to contribute however I felt like. I had a couple of songs that were just floating around and didn't have a home in my own catalog and thought it'd be a good opportunity to use them for this Banquet thing." It was a useful opportunity, he says, because, "I don't get the opportunity to collaborate too much."

Banquet have recorded most of their debut album -- Kapranos is finishing the final mixes now. Stay tuned.