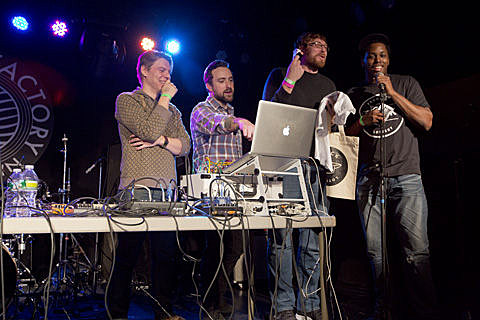 The fourth annual Brooklyn Rock Lottery, which happens on 12/7 at Knitting Factory and randomly puts various members of different bands into new bands for just that day, has expanded upon the previously announced list of participants. Lineup additions include members of Quicksand, Afghan Whigs, DIIV, A Place to Bury Strangers, Dresden Dolls, Antibalas, Sannhet and more. There's still five more artists TBA and one "Very Special Guest," who, like everyone else, will be suject to the following:

The premise is simple, but effective. Twenty-five hand picked musicians meet at 10:00AM at the evenings performance venue. These volunteers are organized into five groups through a lottery-based chance selection. The five separate groups are then released to practice at different locations. The musicians have twelve hours to create a band name and three to five songs (with a one cover-song limit). The groups will then perform what they have created that evening in front of a waiting audience.

Previously announced participants include members of The Make-Up/Nation of Ulysses, Cave In, Oneida, Rainer Maria, and more. Full lineup, as it currently stands, below.

Tickets for the Rock Lottery are on sale now, and all proceeds go to the Willie Mae Rock Camp for Girls, a non-profit music and mentoring program that empowers girls and women through music education. There will also be a raffle at the Rock Lottery giving away some not-too-shabby swag including first class tickets from Delta and badges to next year's Northside Festival. Check out pics & a recap from last year's Rock Lottery. A video of last year's (via Animal) below.

As discussed, Sannhet, whose drummer Christopher Todd is participating in this year's Rock Lottery, just put out a new EP titled Lions Eye. If you haven't heard it yet, you can stream it below.

A Place to Bury Strangers's Oliver Ackerman is also participating, and as discussed, his band is scheduled to play Brooklyn Night Bazaar on Friday, November 29 with Dawn of Midi, Pontiak and Woodsman, so check that out if you want to get your grub on and catch a free show or if you need an activity to get you out of your Thanksgiving food coma.

Check out the list of participants, video from last year's Rock Lottery, and Sannhet EP stream, below...