Sunburned Hand Of The Man

The 1st Annual Memory Burn Psych Fest is a one night affair on Saturday, May 29th, 2010 @ Glasslands in Brooklyn, NY. Inspired by such psych-minded festivals over the past few years such as the Frisco Freakout in SF, Memory Burn gathers a stylistic smattering of local heady, heavy hitters in New York's psych scene for an evening of tripped-out fun...

The inaugural Memory Burn Psych Fest is a doozy, featuring performances from Revival Times, Weird Owl, Future Hunter, The Black Hollies, White Hills, Hopewell, Golden Triangle, Psychic Ills, and Sunburned Hand of the Man. The show kicks off at 7PM and $12 gets you in the door.

Another notable psych-related event in the near future includes The Entrance Band, who will team up with The Growlers at Mercury Lounge for a show on June 12th. Tickets are on sale. The Entrance Band play Bonnaroo just two days prior.

Sunburned Hand of The Man recently contributed to a tribute LP for the fallen Jack Rose, who passed away late last year. The album, entitled Honest Strings: A Tribute To The Life And Work Of Jack Rose, is out now via Fina Music and also features contributions from Bardo Pond, MV & EE, No Neck Blues Band, Six Organs of Admittance, Spectre Folk, and many many other notables. All proceeds from the sale of the record go to the estate of Jack Rose. Pick up that record, and read more about it at the label's site.

The Memory Burn flyer and some video, including a few of Golden Triangle at Sound Fix Tuesday (5/4) is below... 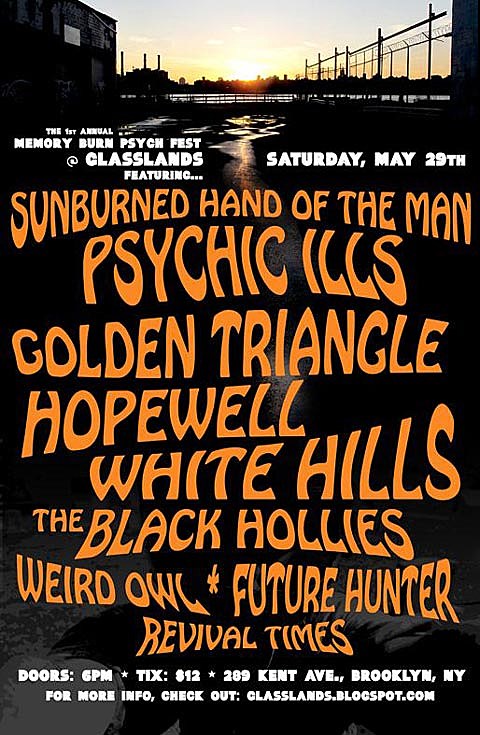