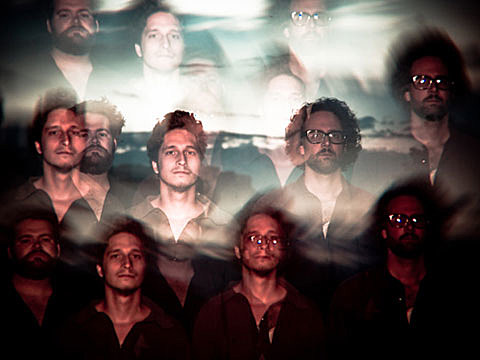 As mentioned, Eight and a Half, the new project from Justin Peroff of Broken Social Scene and two members of The Stills, are playing two Arts & Crafts showcases in NYC this month, which happen on February 23 at Mercury Lounge and February 24 at Glasslands. When we first announced the shows, Zeus and The Darcys were billed for both of them, but The Darcys have since been replaced by Gold & Youth. Radical Dads have also been added to the Mercury show. Tickets for the Mercury show and the Glasslands show are still on sale.

Eight and a Half will release their self titled debut LP on April 10 via Arts & Crafts. You've already heard the first single, "Scissors," and a number of its remixes. They've since revealed that track's b-side, "Go Ego," a more upbeat jam than its predecessor, which you can stream below. We're also premiering a Memory Tapes remix of that track in this post, which you can download above and stream below. Like most songs that Memory Tapes (Dayve Hawk) gets his hands on, the remix is covered from head to toe in disco. A 10" single will be out on March 13 with "Scissors" and its Tokimonsta remix, and "Go Ego" and this Memory Tapes remix.

Streams and dates below...