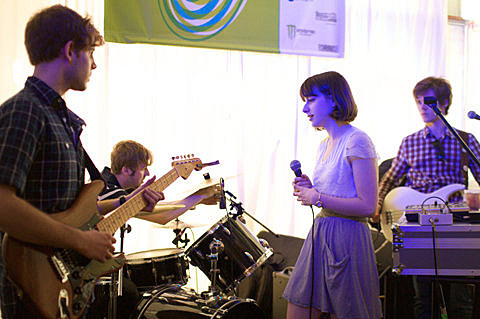 "Memoryhouse, the duo of Evan Abeele and Denise Nouvion, is from Toronto in Ontario, Canada. Their music blends the contemporary with the forgotten, the traditional and the technological, the visual and the aural, within the sonographic landscape of dream pop. Their discography consists of a digital-only EP entitled, The Years and two 7" singles, "Lately (Deuxième)" b/w "Lately (Teengirl Fantasy Natural Mix)" on Inflated Records and the "Caregiver" single on Suicide Squeeze Records. All three were released in 2010. Look for a new Memoryhouse release on Sub Pop before the end of 2011." - Sub Pop

Recent Sub Pop signeees (it was announced before SXSW) Memoryhouse currently have four dates scheduled in June. One of those is in Philly, and two are in NYC. On Friday, 6/10, Memoryhouse play a Brooklyn show at Glasslands with the great supporting cast of High Highs, North Highlands, and Wonder Bear. They then hit Pianos in Manhattan the next night (6/11). High Highs open that one too. Tickets for the Glasslands show on sale now.

The fourth show on their short tour takes place as part of Weapons of Mass Creation Fest which is going down June 11-12 in Cleveland, Ohio, and which is...

...a fest for those who live to create! A weekend community event taking place in the Gordon Square Arts District on Cleveland's west side. It was founded by Jeff Finley of the Cleveland-based creative agency Go Media. Only in its second year, it's already generating lots of buzz within the creative community. Come to WMC Fest to network, collaborate, get inspired, learn new tricks, and level up! Did I mention it's a fest? That means fun!

All dates listed, and a Yours Truly video below...

In My Room: Memoryhouse "Pale Blue" from Yours Truly on Vimeo.