Tim Kasher in Brooklyn in 2012 (more by Ryan Muir) 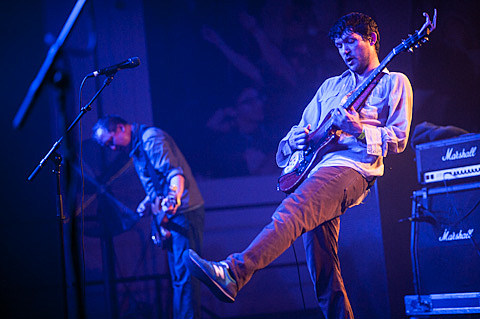 UPDATE: As a commenter pointed out, Chuck Ragan is actually on volume two.

You can stream it on Spotify and purchase it on iTunes, and a free download of Tim Kasher's contribution, "This Again," is premiering in this post. It's a pretty stripped down song as far as Tim Kasher contributions go, but even with minimal layering his unmistakable theatricality is all over it. Check it out.

Meanwhile, Cursive are reissuing The Ugly Organ and playing with a cellist on their upcoming tour that's set to pull heavily from the Ugly Organ era. That tour hits NYC on March 10 & 11 at Bowery Ballroom. Tickets for those shows are still available. Tim's other band The Good Life are touring too but not hitting NYC.

Stream Tim's new track and download it for free below...