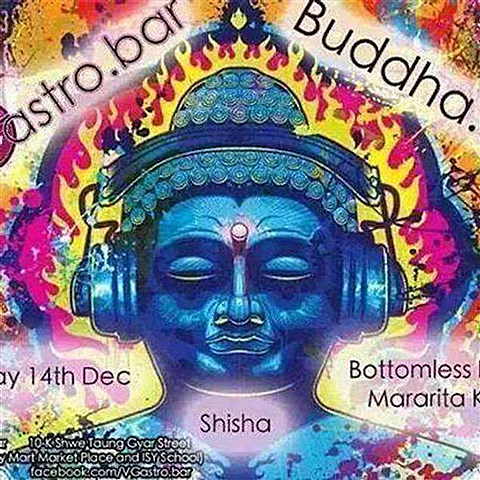 Three men who own a bar in Yangon, Myanmar (Burma) have been sentenced to a two-and-a-half year prison sentence for promoting their bar with a picture of a Buddha wearing headphones (via Gawker):

The image was posted in December on the Facebook page of the VGastro bar and restaurant in Yangon. After an outcry from hard-line Buddhist groups, the police arrested the restaurant's general manager, Philip Blackwood, 32, of New Zealand, along with the bar owner, U Tun Thurein, 40, and the manager, U Htut Ko Ko Lwin, 26. The three have been held in Insein prison in Yangon.

In addition to the two-year prison term for violating the religion act, the three were also sentenced to six months for illegally operating a bar after 10 p.m. Mr. Blackwood said after the verdict that the men had expected they would be convicted. - [NY Times]

Burmese law makes it illegal to insult or damage any religion.