MEN at Webster Hall in 2011 (more by Amanda Hatfield) 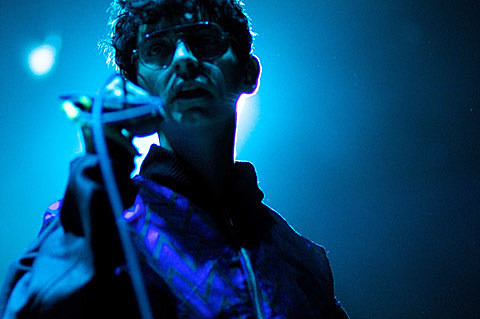 JD Samson & MEN have an upcoming west coast tour, but before that they'll play a benefit in Brooklyn at Littlefield this Friday (1/24) with Bright Light Bright Light. The show is billed as an evening of dancing live music benefitting the Hetrick-Martin Institute, "which provides empowerment, education, and advocacy for LGBTQ youth in New York and New Jersey." The show is being hosted by Ana Matronic of Scissor Sisters and Jonjon Battles is DJing. Tickets for that show are available. All dates are listed, along with the show flyer, below.

MEN recently released their newest album, Labor, and JD Samson just spoke a bit about that album to PrideSource:

"I think of myself as an artist before I'm a musician," she says. "I studied art and theory and learned about self-expression that way; music is just the genre where success came. But when we talk about people using software to learn how to create songs, I think of this: Punk music used to be about self-taught people playing in garages. Now, the self-taught crowd is working from a studio in the bedroom. The aesthetic is very similar - it's about teaching yourself to express opinions through your creativity, to find a channel for those ideas. It seems like a natural progression to me."

That said, one thing listeners will quickly notice is that the vocals on "Labor" have a slicker production value than on MEN's debut. Samson cops to using pitch control, but in alignment with her general M.O., for her it's a tool of expression rather than any sort of crutch or bid for popularity. Given that she was a film student just prior to the digital revolution, she's got a healthy respect for the handcraft of art (in general) and avoids shortcuts. But she also knows how to exploit a fun toy when she finds it.

In related news, speaking of Scissor Sisters (whose Ana Matronic hosts the Littlefield show), their drummer Randy Real is now also the drummer of Gaslight Anthem frontman Brian Fallon's new band Molly and the Zombies, which Brian debuted at the Bouncing Souls holiday shows in December. The lineup also includes Catherine Popper (Ryan Adams & the Cardinals, Grace Potter and the Nocturnals) and Brian McGee. The band recently posted two tracks online, which you can stream, along with the list of MEN dates, below.

Molly and the Zombies - "Sketchy"

Molly and the Zombies - "Red Lights"