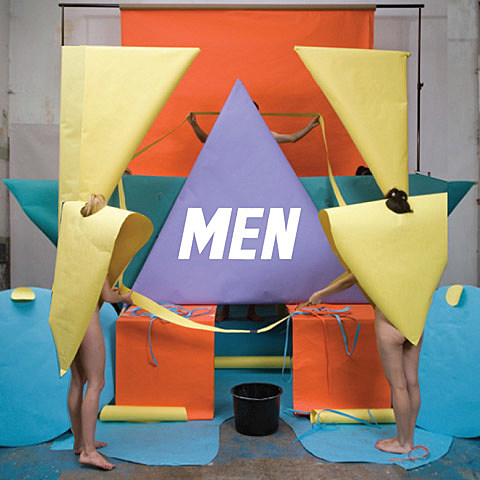 Men will welcome their debut LP Talk About Body on Feb 1st of the new year, via Iamsound, following it up with seven weeks of touring:

We tried to take all of your suggestions, and play in your hometowns, backyards, favorite clubs, and gay alleys.

If we aren't gonna make it to you this time, please please please take a winter road trip with your best friend, brother, sister, lover, mother, professor, or all by yourself. because we want to see YOU!!!! and we want to gather up all your amazing energy. build a huge strong tower with it, climb it, and then tear it down and dance on it.

Those seven weeks will split time amongst the EU and US, with NYC getting a pair of shows: March 9th at Bowery Ballroom (tickets) and April 7th at Music Hall of Williamsburg (tickets). Both shows go on sale at noon on on Friday, 12/10 (via the links provided).

Men recently dropped their single for "Off Our Backs" (from Talk About Body) on 12" and digital download. Check out the video for it below. The EP/12" also features the Lemonade remix of the track which you can download above and stream below. Men also have a few other songs streaming at their blog.

And actually, Hanna didn't just DJ at MoMA that night with the Raincoats, she also joined them on stage for a Slits cover. Video of that, and video of her speaking this past October at Bruar Falls (courtesy of Punk Cast), is below.

MEN song stream, video, and all tour dates are below too...

The Raincoats and Kathleen Hanna cover The Slits' "Vindictive" at a MoMA PopRally party on Nov. 20, 2010.

MEN - Off Our Backs video

MEN - Off Our Backs (Lemonade Remix)