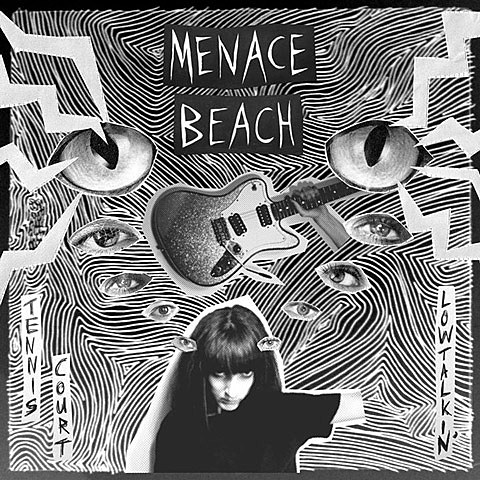 Menace Beach are from Leeds, the same English City that that also birthed Hookworms and Eagulls (and Gang of Four and Sisters of Mercy). Named after an old NES game, the band's sound owes a little to the '90s too, with sludgy guitar poured over some relentlessly catchy pop with the always-appearling male-female vocal combo courtesy main members Ryan Needham and Liza Violet.

Originally a duo, Menace Beach are now a full band that includes MJ from Hookworms (who produces their records), Nestor of Sky Larkin, and Matt from Pulled Apart by Horses. The band released a 7" last year as part of the Too Pure Singles club, then dropped the Lowtalker EP via Memphis Industries earlier this year. The band have a new single, "Tennis Court," out in September and it's maybe their best yet. You can stream the A-side now (via Spin) in this post but you'll have to wait to hear the b-side which features Joanna Gruesome's Lan Mcardle.

Menace Beach have a few UK dates coming up with their Wakefield neighbors The Cribs. Nothing yet planned for North America, though. All dates are listed, along with streams of "Tennis Courts," Lowtalker, and the Too Pure single, below....