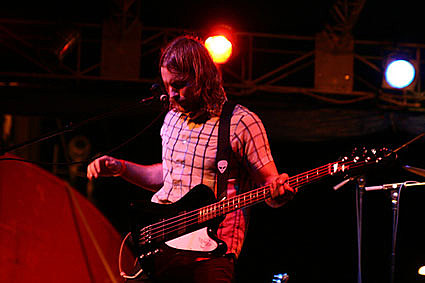 One obvious limitation we faced when booking the Citysol show was that we couldn't have any bands that were already locked in to play the Pitchfork Festival happening the same weekiend in Chicago. It meant we couldn't get local favorites like Professor Murder and Oxford Collapse on the bill, and though Gza really wanted to perform Liquid Swords while overlooking the East River, he just couldn't get out of his prior obligation (I kid). One band sort of did play both though - that's because the South Street Seaport portion of Citysol was Friday night and Menomena weren't playing the Pitchfork Fest until Sunday. 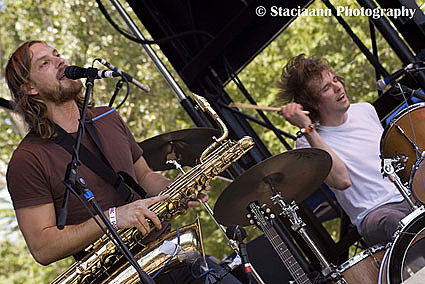 Though I was running around a lot, what I heard of Menomena at the Seaport sounded great. I obviously wasn't at Pitchfork, but Metromix says Menomena's set there was "significantly weakened by poor sound". Also on Pitchfork - The Daily Heave says that "Professor Murder really did try, but sadly was stuck on the third stage of doom", and Rachel reports that she likes Oxford Collapse "more than mastadons but they stuck the oxford collapse in the weird little fenced off corner stage area and I was NOT going back there.".......

Oxford Collapse are playing McCarren Pool this Sunday (7/22) with Annuals and Band of Horses.