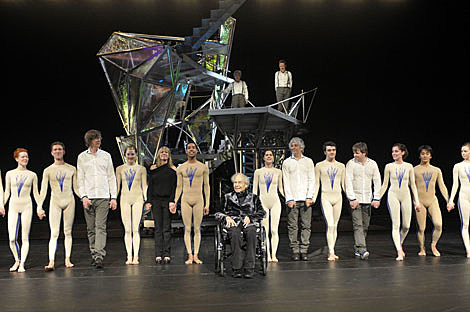 Merce Cunningham, the American choreographer who was among a handful of 20th-century figures to make dance a major art and a major form of theater, died Sunday night [July 26th]. He was 90 and lived in Manhattan.

Mr. Cunningham ranks with Isadora Duncan, Serge Diaghilev, Martha Graham and George Balanchine in making people rethink the essence of dance and choreography, posing a series of "But" and "What if?" questions over a career of nearly seven decades.

He went on doing so almost to the last. Until 1989, when he reached the age of 70, he appeared in every single performance given by his company, Merce Cunningham Dance Company; in 1999, at 80, though frail and holding onto a barre, he danced a duet with Mikhail Baryshnikov at the New York State Theater. And in 2009, even after observing his 90th birthday with the world premiere of the 90-minute "Nearly Ninety," at the Brooklyn Academy of Music he went on choreographing for his dancers, telling people as they went to say farewell to him that he was still creating dances in his head.

In his final years he became almost routinely hailed as the world's greatest choreographer. For many, he had simply been the greatest living artist since Samuel Beckett. [NY Times]

The Merce Cunningham Dance Company is scheduled to perform three free shows at NYC's Rockefeller Park on August 1st and 2nd (presented by River to River Festival). Assuming those go on as scheduled, they will most likely include some kind of tribute to the great choreographer.

A set of videos showcasing Merce's work (including "Nearly Ninety") below...