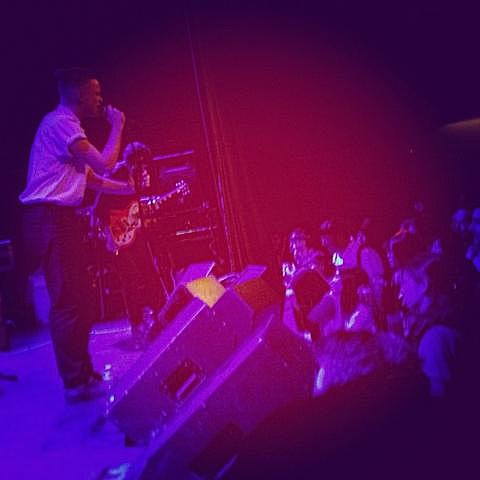 On Friday night (10/19) during CMJ, I made my way over to Brooklyn warehouse Villain, which has recently begun hosting shows, for Pitchfork's unofficial CMJ showcase. The venue's a pretty decent size, but with the wall running down the middle which separated the stage from the bar area, they could only let in 300 people. It's a nice location though, and they had great visuals for every artist, projecting footage of them performing blurred with trippy imagery onto the white wall behind the stage. I got there about a half hour before doors and was told that by the second act, the venue was at capacity, though with the always-crowded smoking pit and bar area, the crowd never felt too dense and it was easy to make your way to the front. I was there for about half the show and saw Angel Haze, Hundred Waters, Le1f, Daughn Gibson, Merchandise, and Holy Other. The whole lineup was great, but my main reason for going was to check out Merchandise, whose only other show this week was a post-CMJ show at Bowery Ballroom last night (10/21) (pictured above), so I'll start there.

Merchandise have been around for a few years, but they gained a significant more amount of attention this year with their impressive Children Of Desire album. And the tunes sound great on record, but the band are still without a permanent drummer and when they tried to pull it off with a drum machine at Villain on Friday, it just didn't cut it. I spent most of their set in the front and their amps were twice as loud as the drum machine (it was a bit better in the back). I've heard people like to mosh at Merchandise shows and there were a few attempts at a pit, but with such a lack of power in the band's sound, I couldn't see the motivation for one. And when frontman Carson Cox demanded the crowd "wake up," it was hard to really agree that the crowd was at fault here. To give credit where it's due, all three members of Merchandise who were on stage were great. They had totally driving bass, sharp guitar lines, and Carson's voice was just as romantic as it is on record and it's still the band's selling point -- they just need a drummer to give them the push they deserve.

A video of Merchandise from their set at the Pitchfork showcase is below.