Merchandise at Mohawk during SXSW 2013 (more by Chad Wadsworth) 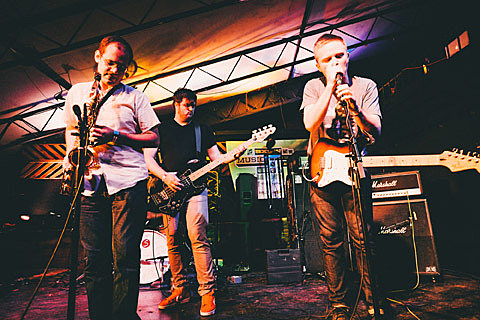 Two members of Merchandise, namely David (as D. Vassalotti) and Carson (as Blonde God), will step out from behind their band to both play solo sets at 285 Kent on Friday (5/10), joined by support from Horoscope. The show lists the headliners as "tba??" but we have assurances that the remaining appearance will NOT come from Merchandise themselves (despite the fact that they play NYU earlier that night with Mission of Burma). Tickets are on sale.

Merchandise are also scheduled to play Northside this year, joining Milk Music and Destruction Unit for a show at 285 Kent on June 15 and tickets are still available.