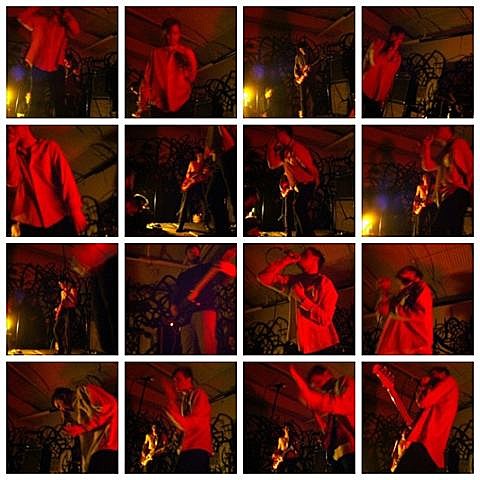 Florida's Merchandise closed out their 2012 with two shows at Brooklyn DIY venue 285 Kent. The first happened on Saturday (12/29) with Philadelphia's Night Sins, plus Pharmakon, Shoxx, and Herzog Rising. Both shows featured Elsner Nino of Shoxx who is now Merchandise's official drummer and gave the songs a harder edge, steering the band a bit back to their punk roots. It almost made stagedivers during "Time" and "Become What You Are" seem semi-normal. OK, not really. You can check out two good-quality videos from Saturday's performance below.

Pharmakon, meanwhile, played a brutal noise set that featured washes of dissonance peppered by blasts of hallowed screams from mastermind Margaret Chardiet. There is a simmering fury that sits just beneath the surface for Chardiet, and in the moments when she lets out that primal scream, it is absolutely terrifying.

Night Sins, who ripped in the small K&M bar back in November, were swallowed whole by the cavernous soundsystem at 285 Kent. The band was sporting a new guitarist with a 12-string awash in reverb which, considering the ambient sound, was completely lost in the mix.

The Saturday show was a last-minute show that was in addition to their previously-announced New Year's Eve show where they played alongside Tonstartssbandht, Blanche Blanche Blanche and "secret" headliners DIIV (though most people had figured out they were playing).

Additionally, Merchandise contributed a list of "merchy's ten taypes_2012" to Pitchfork's end-of-year "Guestlist" feature and you can check out their cassette picks below, along with the video from 285 Kent.