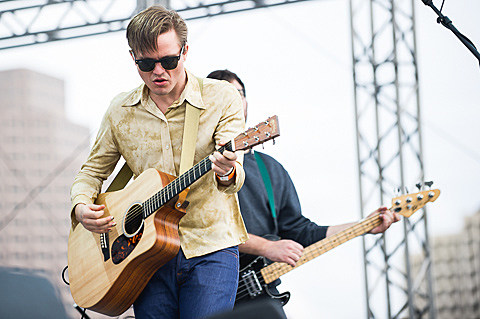 As previously mentioned, Florida post-punks Merchandise are going on a tour which hits NYC on June 21 at Glasslands with Francis Heinzfeller (tickets) and Saint Vitus on June 22 with tourmates The Ukiah Drag (tickets). Since we last spoke, it was announced that Merchandise and The Ukiah Drag will play yet another NYC show June 25 at Home Sweet Home (131 Chrystie St) for the venue's Nothing Changes party. Updated dates are listed below.

Merchandise also just released a new song from USA '13, their 3-way split with Destruction Unit and Milk Music. That split was supposed to come out on Record Store Day but was delayed and will be out this month. Listen to the new song, via Noisey, below.

Speaking of Nothing Changes, since we last spoke, local goth punks Anasazi were added to the Iceage show happening on May 25. That's part of Iceage's tour which also hits Glasslands (5/24) a day earlier with Uniform (mems of The Men, Drunkdriver).

Iceage's pals Lower also play Nothing Changes on 5/28 which is part of their tour that also hits Acheron on 5/30. Since we last spoke, Dark Blue (mems of Clockcleaner, Paint It Black) and La Cruor were added to the Acheron show. Tickets for that are on sale.

Other upcoming Nothing Changes shows include Pedestrian Deposit with Hospital Productions-signed FFH and White Suns this Wednesday (5/7), White Ring the following week (5/14) and more. Full schedule, with the new Merchandise song and their updated list of dates, below...

Merchandise - "No You and Me"