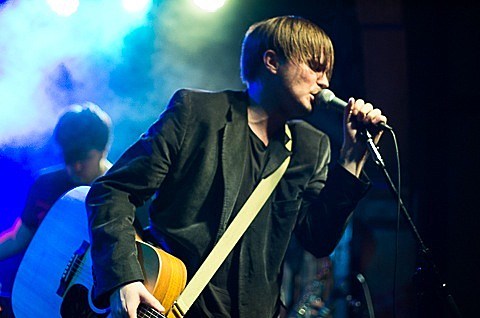 Merchandise played two Brooklyn shows over the weekend as part of their current tour, hitting Glasslands on Saturday (6/21) and then Saint Vitus on Sunday (6/22). I made it to the Glasslands show and thought they were pretty solid. With enough records' worth of material to choose from, their set hit most of the best from Children of Desire and Totale Nite, plus songs from the forthcoming 4AD debut, After the End. I've seen some so so Merchandise live shows, but thought they had it together this weekend, all swoony drama and kinetic action. These guys don't stand still, and trying to take a decent cameraphone pic in low light is a difficult task. "Anxiety's Door" (from last year's Total Nite) and current single "Little Killer" were terrific.

Though the band has serious punk roots, the only remnants of that left in their sound is drummer Elsner Nino (ex-Shoxx) who is a serious basher. I'm not sure that's a good thing. Merchandise's music has more in common with Manchester 1985 (anyone remember Easterhouse?) than Florida hardcore circa 2005. There was no moshing or crowdsurfing at either of these shows, unlike when I saw then at Saint Vitus in 2012, and I personally think a little more finesse in the rhythm department would be welcome. (I have friends who 100% disagree with me on this.) You get that on their recordings, I think, but it's a bit flattened by Elsner's sheer force live. But this was absolutely the best I've seen them since ditching the drum machine and I heard the Vitus show was good too (It was, and doubly good thanks to a trippy, aggressive set from openers The Ukiah Drag - Andrew).

We didn't get any pictures of this weekend's shows unfortunately, but we did just post a set of pictures from their Chicago show. NYC still has one more chance to catch Merchandise when they play the Nothing Changes party on Wednesday (6/25) at Home Sweet Home, also with Ukiah Drag. It's a late show, with things not getting started till midnight or so (doors at 10).

Merchandise's After the End is out August 26. You can watch the video for "Little Killer" from it below...