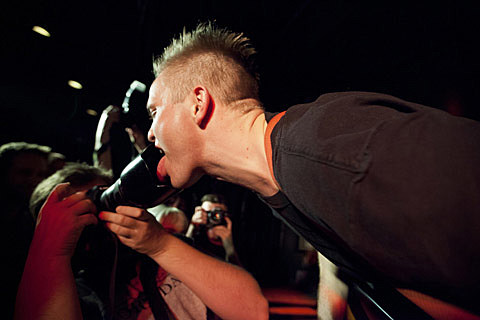 When Merchandise first caught our ears with their Children of Desire album, it sounded like something more fit for 4AD's goth era than the punk label Katorga Works that released it, so it's exciting to hear that the band have now signed with the actual 4AD (which, in addition to those goth classics, is home to big names like The National, Grimes and Deerhunter). That makes them the second band (after Future Islands) to announce a 4AD signing the past week. Congrats guys!

Their first release for the label will be a one-sided 12" with their 14-minute long track, "Begging For Your Life / In the City Light," which first appeared on their recent split tour cassette with Chelsea Light Moving. The single comes out digitally on Wednesday (1/15), will be out on vinyl on February 25 in the US, and it will be followed by a new full length for 4AD at some point.

Merchandise's only upcoming date that we're currently aware of is Festival Nrmal.

You can listen to a four-and-a-half minute edit of the new song below...

Merchandise - Begging For Your Life / In The City Light (Edit)