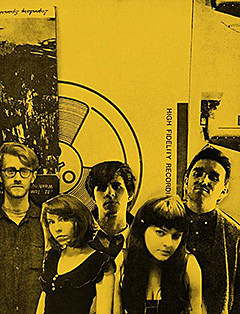 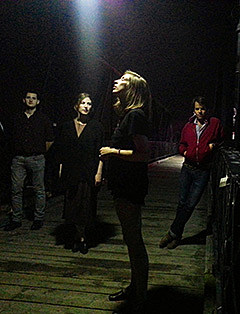 We've done a few of these "Band Vs. Band" posts over the years, but maybe never one where both bands have the exact same names, similar(ish) sounds, formation dates, and factoids. They're also both good and will play in NYC within the next month. Here's Mercury Girls (Philadelphia) Vs. Mercury Girls (Toronto).

Philadelphia's Mercury Girls formed in 2014 and features two Kevins of other bands: Kevin Attics of Literature and Kevin O'Halloran of Little Big League. (The five-piece also includes Sarah Schimineck, Emily Cahill and Chris Schackerman.) Their sound is not too far away from Literature's: breathless, sparkling indiepop. The band shared a couple very catchy demos on their bandcamp in March and played their first show in June with a few more since (including Cake Shop in NYC a couple weeks ago). Look for a single on Slumberland in the not-too-distant future. Stream their demos below, and you can catch them at Brooklyn's Alphaville on August 7. The rest of the lineup is still TBA.

The Mercury Girls from Toronto, seemed to have formed at almost the same time, and also have a member from a notable other band -- Fucked Up drummer Jonah Falco. Their sound is more in a fuzzy, dark post punk direction, however. They also have a demo out and you can stream its five songs below. Toronto's Mercury Girls will be on this side of the Canadian border for two NYC shows this month: July 22 at Acheron with Survival, Honey, and Worse and then Union Pool on July 23 with EZTV and Nude Beach. Tickets for both those shows are on sale now. They're also opening for ChameleonsVOX at their tour stops in Toronto and Montreal. Listen to their demo below.

Clearly, someone's going to have to flinch in this band name duel. Who should it be? And any suggestions for new names? When it happens, if there's no hard feelings, maybe they can play together as it would actually make a good double bill.