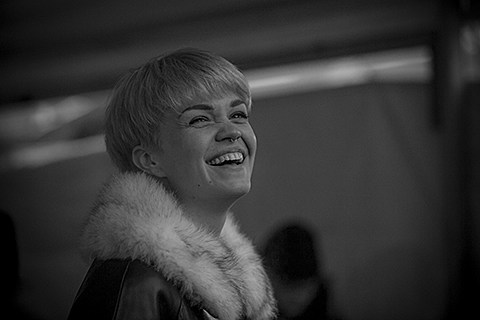 Last year, Perfect Pussy singer Meredith Graves gave an interview where she said she'd be starting a solo career in addition to PP, and her first solo release is her upcoming split 7" with Kevin Devine. Her contribution to that split is "Took The Ghost To The Movies," which is a shoegazy song that has Meredith using clean vocals (though very buried ones), as opposed to her shouts in Perfect Pussy. Listen below (via Spin).

The split is the second installment of Kevin Devine's ongoing Devinyl Splits series, and comes out May 26 via Bad Timing Records (pre-order). Part 1 is with Nada Surf singer Matthew Caws (listen), part 3 will be with Tigers Jaw, and three more are TBA. Kevin appeared in NYC last week as a special guest at the Andy Hull show, along with Brand New's Jesse Lacey.

Perfect Pussy will next play on May 23 at Brooklyn Night Bazaar with Big Ups (who play NYC tonight, 5/5), Vulture Shit, Nine of Swords and Nonsense.

Stream "Took The Ghost To The Movies" below...