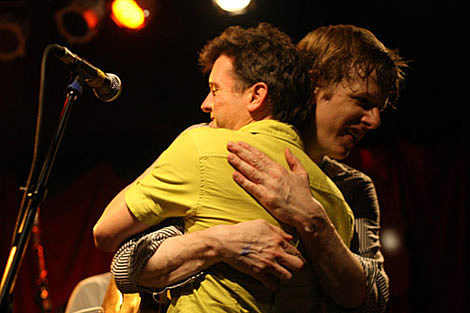 The much anticipated XX Merge Festival took place last week in North Carolina with a five-day (July 22-July 26), Wednesday to Sunday run of shows. Last night (Sunday)'s show with She & Him, American Music Club and Wye Oak was the only fully announced lineup. The other four nights (and one day) were a grab bag of any number of Merge bands past and present. Did you go? What were the highlights?

Mac McCaughan came out on stage before [Pipe] instead of the night's emcee and announced that there was a lone protester outside. He invited him up on stage and it was Jon Wurster decked out in Phillies gear as Philly Boy Roy. He was holding a sign that said "Boycot MERGE." He complained that Merge didn't have any Philly bands on their roster and Mac said that they have bands from Jersey, which is close to Philly. You never compare Jersey to Philly in front of Philly Boy Roy. It was hilarious.

All of this led to the introduction of New Jersey punks Pipe. As soon as they kicked into their first song, beer cans and plastic bottles started flying. Frontman Ron Liberti ate it up and even put himself in the line of fire, headbutting some of the cans while kicking some back into the crowd. Liberti bounded around the stage, essentially taunting the crowd. The crowd loved the band's antics as did I (but that may have been different if I hadn't managed to stay dry). [triangle music]

You can see the partial setlist from Spoon, who headlined that night, below.

In addition to the Cat's Cradle shows (the venue for 4/5 of the night shows), Saturday featured a day show that included Julian Koster solo as Music Tapes and Mac McCaughan with violin accompaniment as Portastatic. A few videos from that set, below.

M. Ward, who's playing the Central Park Summerstage this Saturday (August 1st), played at the fest's Saturday night showcase. Zooey Deschanel joined him for a cover of the Beatles' "Birthday." Not too big of a surprise considering She & Him headlined the Sunday night show.

Other XX Merge artists who recently stopped in NYC include The Clientele and Richard Buckner (they played Music Hall of Williamsburg last Sunday), Versus and Superchunk (they played South Street Seaport last Friday), and Spent (they played Coco 66). Spoon didn't play a NYC show, but they were spotted in the audience of Paul McCartney's third of three shows at Citi Field in Queens. Destroyer is on his way up. He plays Bowery Ballroom on Thursday. Mark Eitzel (as American Music Club) played Le Poisson Rouge and Maxwell's before XX Merge, and now he's on his way back for a show at The Bell House.

Lineups for each night of XX Merge, with videos, and a bunch of setlists, below...

this is who ended up playing...

(thx BS for the help with lineups)

these are some of the songs people played...

The Essex Green set list: (via)
?
Don't Know Why (You Stay)
?
Penny & Jack
Mrs. Bean
By the Sea
Rue de Lis
The Late Great Cassiopia
Snakes in the Grass
?

Spoon set list (via):
?
Got Nuffin
Lines in the Suit
The Ghost of You Lingers
The Beast And Dragon, Adored
Stay Don't Go
Chicago at Night
Is Love Forever? (new song)
?
Don't Make Me a Target
Eddie's Ragga
Mountain of Sound
Peace Like a River (Paul Simon cover)
Small Stakes
My Mathematical Mind
Black Like Me
----------
? (w/ Mac McCaughan)
Don't You Evah
The Fitted Shirt

and here are some videos...