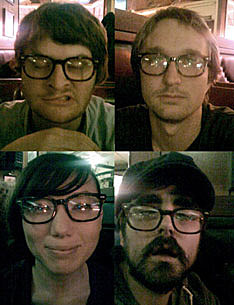 "On April 7, 2009, Merge Records will release the debut album from Seattle's Telekinesis entitled Telekinesis!. Telekinesis is the project of Michael Benjamin Lerner. Michael recorded Telekinesis! at Two Sticks Audio in Seattle with producer Chris Walla (Death Cab for Cutie, The Decemberists, Tegan and Sara). Michael wrote and sang all of the songs and played nearly all of the instruments on the album, but tours with a full band that includes David Broecker (guitar), Jonie Broecker (bass, keyboards), and Chris Staples (guitar)."

Telekenisis have a few shows lined up for the next few months - none in NYC yet, but they will be playing Noise Pop, SXSW, and a bunch of dates with Ra Ra Riot.

Ra Ra Riot also have a bunch of shows lined up without Telekenisis. For NYC, it's just January 22nd at Bowery Ballroom which is the Planned Parenthood Benefit with Regina Spektor that sold out before it was even announced that they were also playing the show. They're also playing Noise Pop, and SXSW, and a bunch of dates with both Passion Pit and Cut Off Your Hands.

Cut Off Your Hands officially release their debut LP, You & I, via Frenchkiss Records on January 20th. Download the first single for free above. They're also playing SXSW (as are their labelmates Passion Pit).