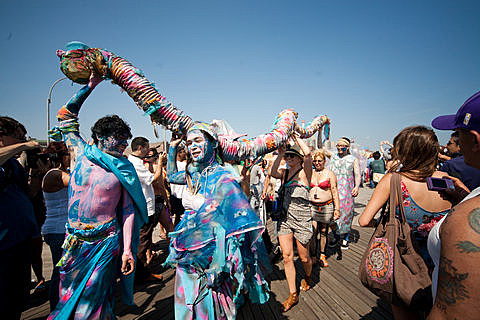 No need to wait for Sunday's Gay Pride Parade to experience colorfully and barely dressed people marching down a NYC street in front of thousands of spectators. Saturday (6/23) is the annual Mermaid Parade in Coney Island. The parade starts at 2 PM on West 22nd St. between Surf Ave. and the Boardwalk, but get there earlier for a good spot (and don't forget to leave time for the long subway ride).

As always, the parade will be followed by the Mermaid Ball, which starts at 7 PM at the New York Aquarium. This year's ball features a Moby DJ set and live sets by The A Bones, Labretta Suede and the Motel 6 and The Moto-Wrays, in addition to this year's king Jackie Martling performing in the Aquatheater, burlesque dancers, go go dancers, "real live mermaids," a laser light show tent and more. Tickets for the ball are available.

Meanwhile, Friday Night Fireworks on Coney Island have begun and will continue every Friday (including tonight) through August 31. "For the best seating, locate yourself on the boardwalk or beach between West 10th Street and West 15th Street." The flier for this is below. **Entry line starts on the boardwalk at 8th Street**