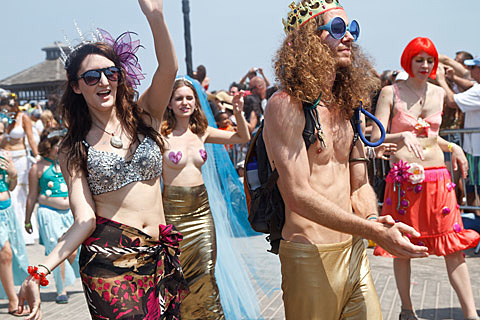 Having persevered through Sandy-related setbacks last year, Coney Island's annual Mermaid Parade happens this year on June 21, beginning at at West 21st St and Surf Avenue. It starts at 1 PM but, like usual, you should get there earlier if you want a good spot. And if you want to be in the parade, registration is open now.

This year's king and queen have been selected but aren't announced yet. Stay tuned. Each year the official afterparty, the Mermaid Ball, follows the parade though details on that have not been announced yet.

Meanwhile, much sooner than that in Coney Island is the first weekend of Burlesque at the Beach, the Coneylesque Carnival, "all the things you love and more about Burlesque & Circus under one roof!" That goes down on May 8 at 9 PM. Tickets are on sale now. More info below...

Featuring anything to do with the amazing stunts of circus arts and sideshow, and with nothing more than pure heart and adoration for CONEY ISLAND! Watch us as we give the stage all we have and ignite the room with talent and flair!