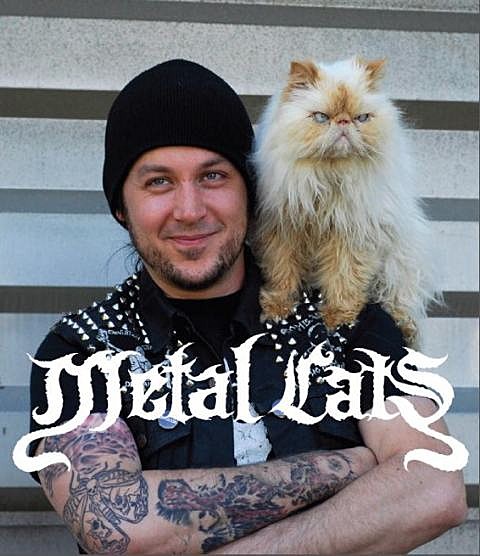 A couple weeks back we talked about Metal Meowlisha IV: A Headbangers Furball, death metal greats Obituary's fundraiser fest for feral cats in the Tampa area on 12/21 featuring Exhumed and Terrorizer (lineup below). Those in need of further proof of the inborn bond between metal man and kitty cat need look no further than the previously mentioned Metaldudes Cats book titled, fittingly, Metal Cats will be published in April 2014 and is meow available for pre-order. The book, cover art above, contains photos of over 100 metal musicians and fans with their cats, including:

That's a lot of cats! A portion of the proceeds of Metal Cats will go to no-kill shelters.

In other metal book news, a new Slayer biography has emerged, titled Slayer 66 2/3: The Jeff & Dave Years. A Metal Band Biography. The book was written by DX Herris, who previously has written about Slayer in his 33 1/3 series entry, Slayer's Reign in Blood. The book clocks in at a whopping 628 and here's a description:

This timely rock biography answers burning questions, shatters popular myths, and uncovers new truths about Slayer, the iconic group that became the embodiment of heavy metal. This full-length, exhaustively researched account of the thrash kings' career recaps and reevaluates the years guitar hero Jeff Hanneman and drum legend Dave Lombardo were in the group. Over the course of 59 chapters, 400 footnotes and three appendices, it profiles the members and presents dramatic scenes from 32 years in the Abyss: A fresh look at the group's early days. Reign in Blood tours. A European invasion. The Palladium riot. The seat cushion chaos concert. Newly unearthed details from Lombardo's turbulent history with the band. Historical artwork and photos never seen in public before. The entire diabolical discography. Hanneman's hard times. The Big Four's big year. Lombardo's final exit...

And a lot more -- sounds pretty thorough. It's currently available in an interactive e-book edition for... $6.66.

Slayer recently rolled through Madison Square Garden with Gojira on their first tour since the passing of Jeff Hanneman. We'll have photos soon -- did you go?