Kurdt Vanderhoof (right), pictured with a dude who is no longer in Metal Church 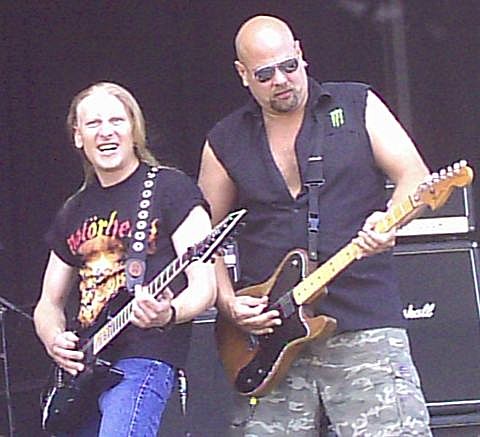 Serious question: do defunct metal bands that have any remotely plausible claim to "legendary" status ever really die? The answer increasingly appears to be no, as long as at least one original member is still interested in playing live under the name. (And not even that is necessary; see Napalm Death.) While certain highly (or moderately, or kinda-sorta) influential bands from metal's golden age have gone permanently to their graves, the Diamond Head and Anvil types, who endure perpetual lineup changes while periodically touring or releasing critically-ignored variations on their early material, may actually be more common.

Metal Church are another example of this phenomenon. Like Diamond Head, they're a turn-of-the-'80s band that straddles the line between thrash metal and NWOBHM; they're also best known these days for their association with Metallica. In Metal Church's case, that association comes by way of Lars Ulrich, who drummed for them very briefly in their early days; James Hetfield also lobbied successfully on their behalf with Elektra Records, who picked them up in 1984.

Metal Church's star faded with metal's fortunes as a popular music genre in the early '90s. The group has flickered in and out of existence since, splitting for a few years in the mid-'90s and again in 2009 before reforming in 2012. Only main guitarist and songwriter Kurdt Vanderhoof remains in the band from their original lineup; almost two dozen musicians have been in and out of the group since its inception 33 years ago. They released a new album to minimal fanfare back in October, and now they've announced a February/March 2014 tour that includes a stop at Saint Vitus Bar on March 4. Tickets are on sale but the supporting lineup hasn't come together yet.

Shows like this one (or like Diamond Head's gig at Vitus earlier this year) always pose dilemmas. On one hand, the prospect of seeing a band that was so massively popular and influential at one time in such a tiny venue is enticing if you're a fan of their classic-era material. On the other, Metal Church 2013 is literally not the same band as the Metal Church that recorded Metal Church and The Dark in the mid-'80s. Rickety or phoned-in live shows are always a risk with such fourth-gen lineups (though most of the current Metal Church unit have been associated with the band for about a decade). I doubt that most of this show's attendees will be old enough to remember the band's performances from their prime , but it's still possible to sully the recorded material from the era.

How many of you are fans of this band? Will you check this gig out? Stream a cut from their new album and check out the full run of dates below while you ponder your answer.