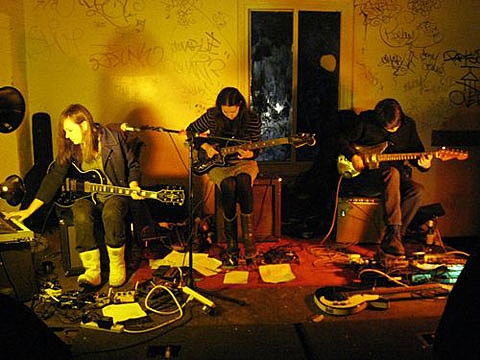 Minimalist psych-folk supergroup Metal Mountains, aka Helen Rush, Pat Gubler and Samara Lubelski, will release their debut album Golden Trees via Amish Records on on January 25th, 2011. Download the first track on the new LP, "Structures In the Sun", above. See the full 7-song tracklist, along with the very minimial video (which prominently features the album's cover art and not much else) for the same song, below...

--
Metal Mountains "Structures in the Sun"

TRACKLISTING
1. Structures In The Sun
2. Orange/Yellow
3. The Golden Trees That Shade Us
4. Flickers within/without
5. Turn to the East
6. Silver Sun
7. Prisms

Metal Mountains have no upcoming shows at the moment, though you may have recently caught them when they opened for Kurt Vile at Knitting Factory on December 3rd.