photo: Revocation at Gramercy in 2014 (more by Mathieu Bredeau) 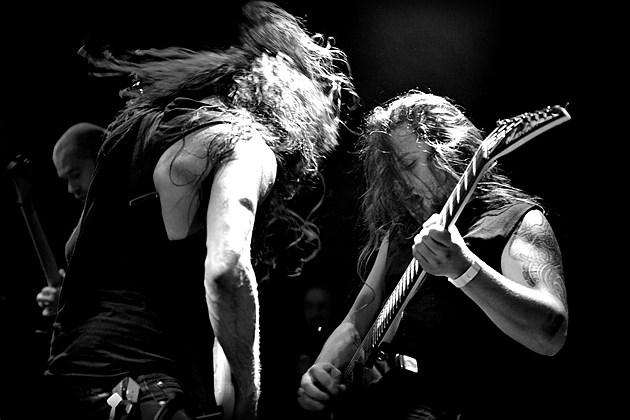 As always, the metal and hardcore universe continues to exist unabated. Here's a roundup of some stuff coming up...

There's a bunch of heavy festivals here in the states. Besides the always-great festivals like Maryland Deathfest, there are a few recent metal fests announced that lean more towards mall metal but do have some good stuff. First of all there's New England Metal and Hardcore Festival, which goes down in Worcester, MA On April 15-16. This year's lineup includes headliners The Black Dahlia Murder and Killswitch Engage, plus Earth Crisis, Ringworm, Rivers of Nihil, Old Wounds, Fallujah and various others. Tickets are on sale now.

Also, in upstate NY, there's Rock'n Derby Festival on May 20-22 with Lamb of God, Megadeth, Clutch, Wolfmother, Wild Throne, Anthrax and Ghost. Not to mention Dokken and Scott Stapp! This fest will also involve a demolition derby and pro wrestling. What are you waiting for? Buy tickets now.

In terms of NYC shows coming up, tech-death monsters Revocation are going on a short run of dates and hitting Saint Vitus on March 17. Support for that has yet to be announced, but tickets for that are on sale now. Dates below.

Old-school evil black metal band Archgoat are touring with Valkyrja, and they'll be stopping in NYC for a show at Saint Vitus on March 20. Tickets for that are on sale now, and you can check out all tour dates below.

Heavy, catchy punks Angel Du$t are playing a few east coast dates with Higher Power and Soft Grip, including NYC at The Acheron on March 18 with support from Liberty. Tickets for that are on sale now, and you can check out those dates below.

There's some new music making the rounds, including a new single from locals Prong. That's called "Cut and Dry," it's from their upcoming album X - No Absolutes, which is out today (2/5) and you can stream it below. The whole album is on Spotify.

San Francisco doom duo Black Cobra have a new album on the way called Imperium Simulacra and they recently debuted the title track. It's a stellar piece of riff-mongering, the likes of which we've come to expect from this band, and you can stream it below. Imperium Simulacra is out February 25 via Season of Mist.

Canadian power-metal band Striker just premiered their incredibly fun new LP Stand in the Fire over at Invisible Oranges. You can stream that ripper below. As always, keep an eye on IO for a steady stream of good metal.

UK doomers Conan have new album called Reveangance and now they have a video to go with it. Check out the clip for "Throne of Fire" below. Conan hit Saint Vitus on March 8 with Serial Hawk.

Now on to the reminders. Since we last spoke much has been announced. There's Amon Amarth/Entombed A.D., The Sword/Purson, Dylan Carlson, Weekend Nachos, Kvelertak/Torche/Wild Throne, and Grim Reaper.

That about does it. What did we miss? Stream new Black Cobra, Prong, and Striker, and check out the new Conan video below...