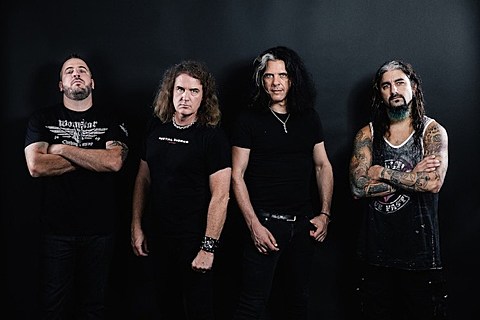 They played Best Buy Theater in NYC last night (9/17), doing a ton of classic covers like the Misfits' "Last Caress," Metallica's "Seek and Destroy," Black Sabbath's "Into the Void" and Iron Maiden's "Run to the Hills" (videos of all of those below).

They have a much smaller NYC show happening tonight (9/18) at Saint Vitus. The core members will definitely be at tonight's show, and special guests are promised (presumably some of the album guests?). This one's a little more high concept than last night. Rather than just an array of covers, Vitus says they're playing Van Halen's self-titled album and Black Sabbath's Master of Reality. Opening the show is Extinction AD and Magus Beast. Tickets are on sale now.

They also will do a live interview at AOL Studios in NYC today (5:45 PM doors) and they have an in-store at Long Island record store Looney Tunes on Saturday (9/19). There are a few other dates too, all of which are listed below...