Black Tusk at Saint Vitus in 2013 (more by Caroline Harrison) 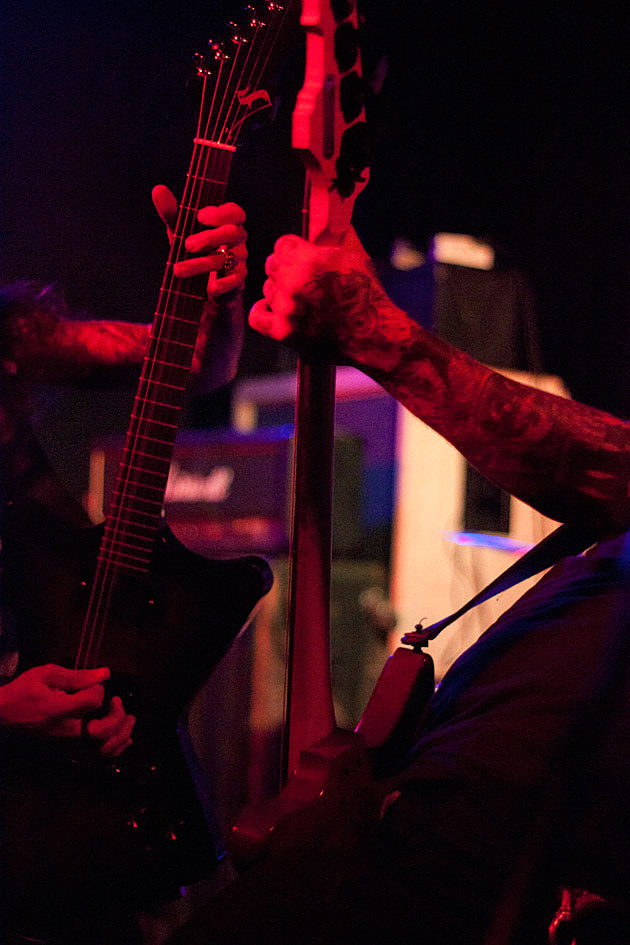 SXSW may be all about catching the hippest bands--check out the SXSW schedule for a lowdown on what's going on (or browse our "SXSW" tag for some highlights) -- including three BV day parties and the BV official showcase -- but there's no shortage of metal to bang your head to, either. Our metal blog, Invisible Oranges, is putting on a showcase on Thursday, March 13 at the Quantum Lounge (303 W. 5th St.) with Black Tusk, Mutoid Man (members Converge/Cave In), Kayo Dot, Yautja, Wild Throne and Venemous Maximus, and there are a number of other showcases and parties bringing heavy vibes. Here's a rundown of those events (with flyers and more details below).

On Wednesday (3/13), it's the first of four Converse x Thrasher Death Match day parties at the Scoot Inn (1308 E 4th St) from noon to 6 across two stages with heavy representation from Earthless and The Shrine, plus some fun non-metal like Black Lips, Trash Talk (who also play the free Thursday BV party at Red 7), Cherry Glazerr and more. Free to the public.

There's also a not-free Heavy Metal Parking Lot day-into-night party at The Lost Well (2421 Webberville Rd) with Wino's reformed Spirit Caravan, The Shrine, Kylesa, Lazer/Wulf, Truckfighters and more. You can get advance tickets to that one.

Wednesday night, Relapse Records (who signed Iron Reagan, who do play SXSW but not this show) throws their showcase at The Dirty Dog (505 E. 6th St) with Windhand, Christian Mistress, Nothing, Obliteration, Primitive Man and Pyrrhon. You can also catch Nothing for free at the Thursday BV party at Red 7 which Trash Talk is also playing.

Not far from there, Roadhouse Management / Nuclear Blast Records will be presenting their showcase inside at Red 7 (611 E. 7th St) with Orchid, Kadavar, Scropion Child, BP Fallon & the Bandits, Mothership, Sweat Lodge and The Well. (Not metal, but outside at that same venue on the same night is our BrooklynVegan showcase. And hey, there are some heavier bands like Touche Amore and Frameworks on the bill.)

Also on Wednesday night, you can catch Wrekmeister Harmonies at Remedy (209B W. 5th St) with a non-metal lineup of Sean Nicholas Savage, Audacity, Tyvek and more.

Thursday (3/13), the free Converse x Thrasher Death Match parties continue with Windhand, Nothing and not exactly metal (not that Nothing is really metal either), but certainly loud bands Fucked Up, Destruction Unit, together PANGEA and Dirty Fences.

We do of course hope you come, but you can also catch Scale the Summit, The Ocean, Rivers of Nihil, Felix Martin, Vattnet Viskar, The Atlas Moth and Silver Snakes at the Metal Injection showcase at the Dirty Dog (505 E. 6th St).

That night, MetalSucks puts on their showcase at The Dirty Dog (505 E. 6th St), headlined by Animals as Leaders, and also featuring sets by After the Burial, Ringworm, Iron Reagan, Mutoid Man, Whores and East of the Wall.

The last day of the free Converse x Thrasher Death Match parties happens on Saturday (3/15), and though there's no metal at all on this one, you can still rage to Perfect Pussy and Diarrhea Planet.

And if you've got a badge, you can check out some of the metal panels during the day, including From Riffs to Bits with James Williamson (The Stooges) and Buzz Osborne (Melvins) on Friday at 12:30 PM, and Has Metal Lost Its Edge? with Brandon Stosuy (Pitchfork), Chris Gigg (Woe), Emilie Friedlander (The Fader), former BrooklynVegan contributor Fred Pessaro (Noisey), and Kim Kelly (Pitchfork) on Thursday at 3:30 PM.

That's a good amount of choices of the heavy persuasion for this year's SXSW, but if you're trying to narrow down the things you want to catch, we've put together a list of 11 metal bands we're looking forward to seeing. Check out that list (in alphabetical order) and along with flyers and set times for the above-mentioned shows, below...

INDIAN
Sludge metal is supposed to be negative, but even by the standards of the genre, Chicago's Indian get way dark -- the opening track to their recently-released album From All Purity is a horrific one-riff plodder entitled "Rape." Come for the huge riffs, stay for the mind-scouring power electronics and raw-nerve vocals. (DM)

KAYO DOT
Throwing around the term "avant-garde" with respect to metal has gotten surprisingly fashionable, but Brooklyn's own Kayo Dot justify its usage more than virtually any other band in the game. Toby Driver's ever-evolving main squeeze flows like mercury through lengthy, spacious compositions that can collapse into claustrophobic noise at a moment's notice. Catch them at Invisible Oranges' own showcase on 3/13. (DM)

MUTOID MAN
Mutoid Man will melt your eardrums. The two-piece, which consists of Cave In's Stephen Brodsky and Converge // All Pigs Must Die's Ben Koller, are the definition of no-nonsense. Their debut LP, Helium Head, is a seemingly never-ending stream of heavy, soulful riffage. If you're prepared to be possibly rocked to death, you can catch them at the Invisible Oranges official SXSW showcase. (ZP)

NOTHING
Okay, so maybe they're not metal, but because of their record label (Relapse) and the fact that they're on a handful of the above-mentioned shows, it's tempting to consider Nothing a metal band. Really, they're shoegaze (and not the way people call Deafheaven shoegaze), and few modern bands of the genre have perfected the Wall of Sound as well as these guys have. (AS)

POWER TRIP
Power Trip blew minds in 2013 with their crossover thrash tour de force (ha!) Manifest Decimation, an album title that perfectly describes both the band's sound and their live performance. Prepare for chaos and consider a helmet. (WM)

PSALM ZERO
NYC's Psalm Zero has quickly become a critically acclaimed paragon of experimental metal weirdness, blending in Tolkien-esque chant-like vocals with uncomfortable, stripped down, hypnotic riffing. That might not sound like a ringing endorsement, but it is. (WM)

RINGWORM
Aside from a five-year hiatus in the late '90s, Ringworm have been around for over two decades. Like Liam Neeson, they've only grown more potent with age. Though they're most closely associated with Cleveland hardcore, I think of them as a really mean-spirited metal band -- they're like Slayer if they traded the epic grandeur for an attitude problem. I dare you not to headbang to them. (DM)

WILD THRONE
Pacific Northwest prog metal outfit Wild Throne welcome their adrenaline shot of an EP, Blood Maker, today via Brutal Panda Records. They've given us a Frances the Mute-like assault with, dare I say it, even more brawn and noise. Catch 'em at the Invisible Oranges official SXSW showcase on Thursday (3/13) at Quantum Lounge. (ZP)

WINDHAND
Windhand revel in the traditional doom riffs that we've gotten from Black Sabbath through Electric Wizard, but with Dorthia Cottrell's melodic vocals, it's legitimately catchy stuff too. (AS)

YAUTJA
Nashville's Yautja have only three guys in their lineup, but they make more noise than some bands with twice as many members. When they played NYC with Psalm Zero a few weeks back, standing in front of guitarist Shibby Poole's imposing dual rig felt like getting hosed down with concrete. Witness the sludge/grind mayhem at Invisible Oranges' own showcase on 3/13. (DM) 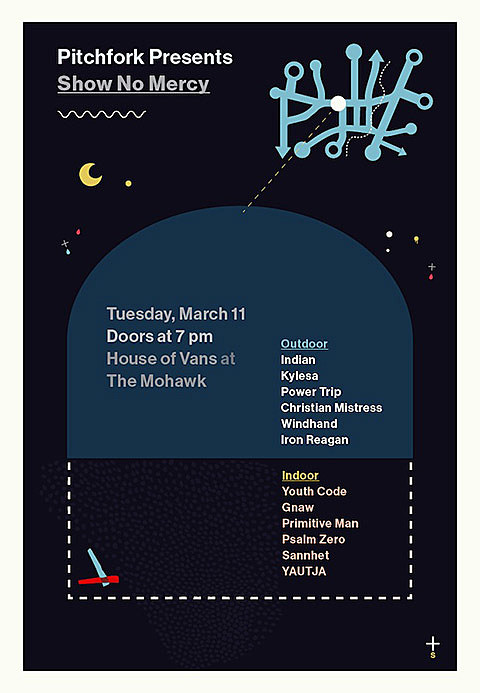 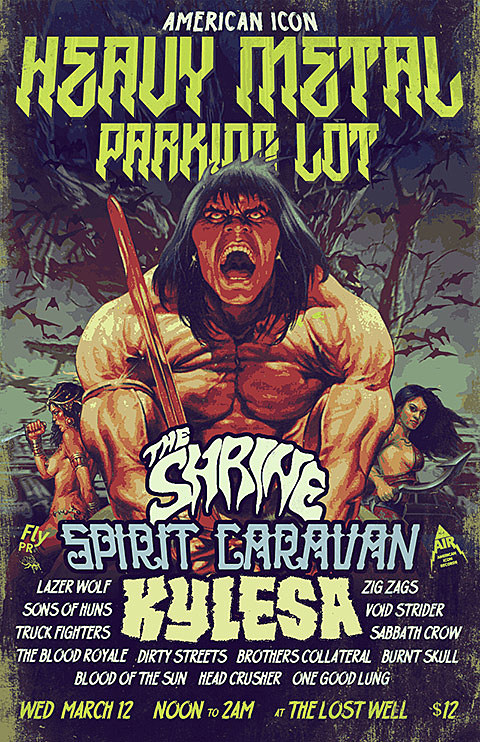 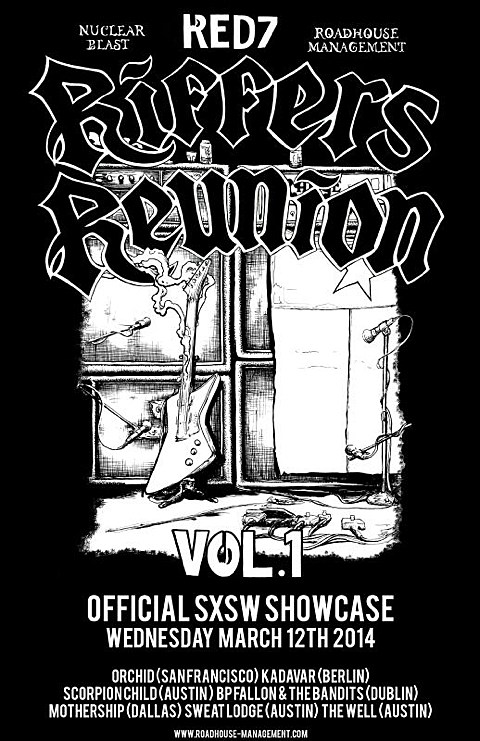 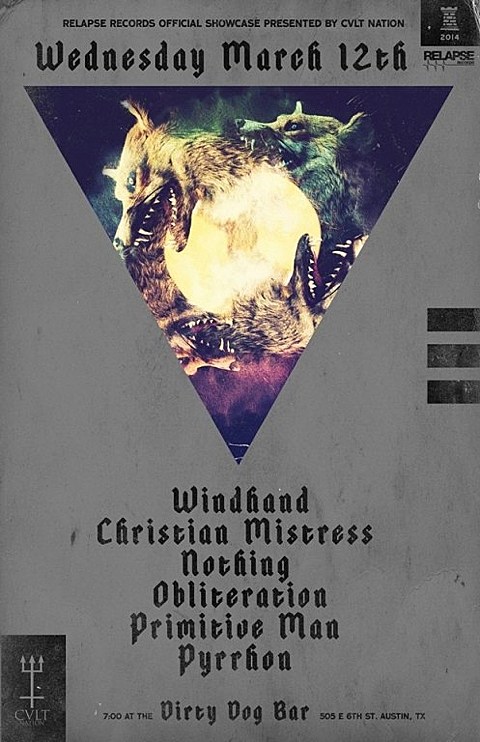 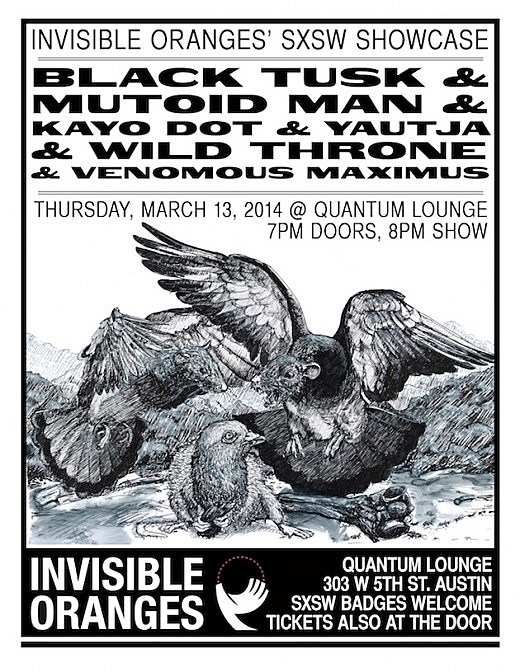 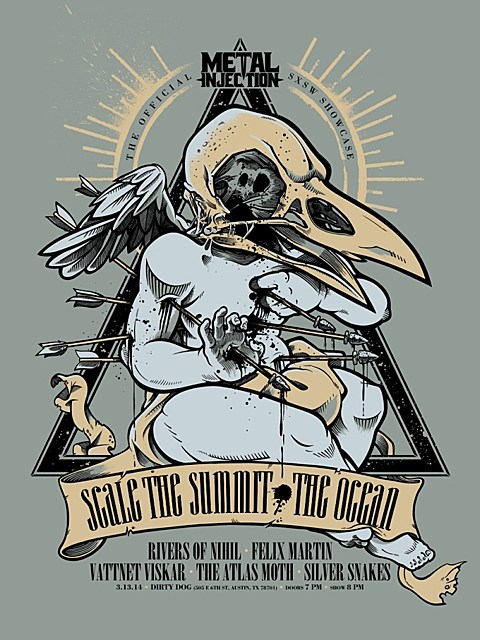 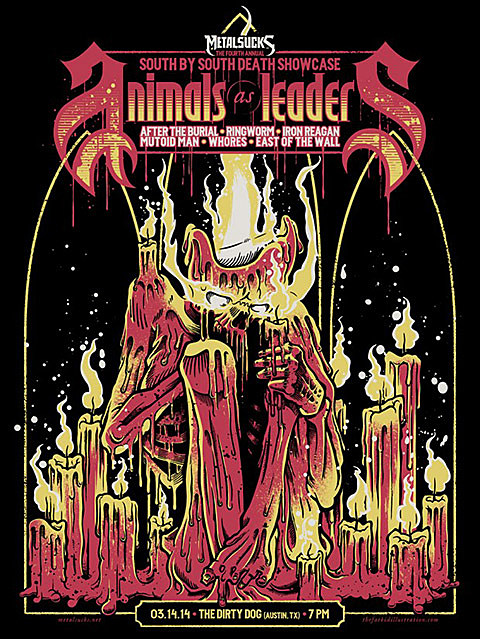 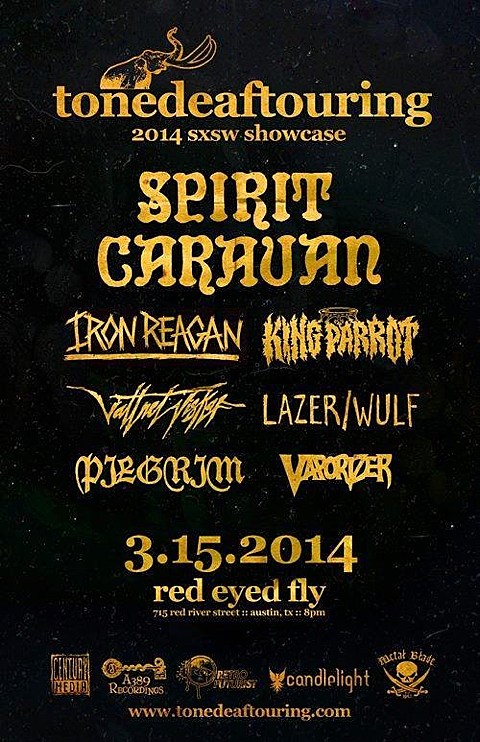