Tons of shows get announced every week, and it can be hard to keep up. Here are all the heavy music (metal, hardcore & more) tours, shows & fests that we posted on BV this week, and some new ones too...

Before heading out on tour with Caligula's Horse, New York prog metallers Moon Tooth will play three headlining shows in the Northeast, starting at Brooklyn's Saint Vitus on 1/23 and then hitting Boston and Philly. All dates and tickets here.

Long running multi-venue Florida punk fest The Fest, which also includes wrestling matches, has branched out in recent years with year-round "Fest Wrestling" events. One of those -- dubbed Metalcade -- is happening this year on April 4th in Tampa, Florida, and as you may have figured out by now, this one is pairing live wrestling with live metal. Headlined by Florida death metal legends Obituary, the lineup also features Municipal Waste, Bloodlet (who replaced Exhorder) and Florida legends Nasty Savage! We're thinking of planning a vacation.

Obituary meanwhile begain a 12 day "Cause of Death" Australia and New Zealand tour today. Most of those dates are with Wormrot. Obituary head out on the road with Black Label Society in February.

As mentioned, Worcester, MA doom band Warhorse are keeping their reunion going this year, and their first show of 2020 is just around the corner. It happens in their home state at Cambridge's Middle East on 1/16, and a few weeks later, they come to NYC for a BrooklynVegan-presented show on 2/1 at Saint Vitus with Yatra and Green Dragon (tickets). In related news, Grief offshoot Come To Grief (whose Terry Savastano is also in Warhorse) have a new EP coming out on 2/14 and you can hear a track here.

Any New Yorkers reading this may want to know that local blackened grindcore trio Vomit Fist are playing a hometown show this Saturday (1/12) at Saint Vitus with Netherlands, Bangladeafy, and Thaetas. (Vomit Fist are not to be confused with Connecticut death metallers Vomit Forth, who just played the same Brooklyn venue this past weekend, opening for Frozen Soul.) Also worth pointing out is that Vomit Fist's guitarist is Doctor Nerve's Nick "Vürdoth" Didkovsky and their drummer is Nick's son Leo "Lurkrot" Didkovsky, who's also the current drummer for Liturgy and Kayo Dot. Listen to the Vomit Fist EP that came out last month:

Fresh off playing the 70,000 Tons of Metal Cruise earlier this week, NJ thrash legends Whiplash have two shows on land coming up. First they play Brooklyn's Kingsland on 2/1 with Concussion, Final Siege, Death Merchant, and Tombstoner; and then they play Old School Metal Vol. 2 in Mexico City on 2/15 with Atrophy and Morbid Saint.

Portland's genuinely gross death metallers Triumvir Foul (whose primary members are both also in Ash Borer) have announced an East Coast tour supporting last year's piss-fueled Urine of Abomination, and it's with Canadian black/death/war metallers Human Agony, who released their debut album Putrescence of Calvary on Invictus Productions last year. The tour kicks off in New Brunswick, NJ on 2/29 and it hits Worcester, Philly, Pittsburgh, Columbus, Richmond, and DC before wrapping up at Brooklyn's Saint Vitus on 3/7, where they'll have likeminded support from promising local Brooklyn band Bog Body. All dates here.

Prog/hard rock vets Wishbone Ash (led by sole original member Andy Powell) are releasing the new album Coat of Arms this year on February 28 via SPV/Steamhammer, and they've also got tons of tour dates lined up, including a Europe run with Uriah Heep and Nazareth, and headlining US shows in New York, New Jersey, Pennsylvania, Texas, Florida, New Orleans, Vegas, Oakland, Portland, Seattle, and more. All dates and tickets here.

Stoner metal vets Weedeater were pretty busy on tour throughout 2019, and they're keeping the momentum going by announcing a co-headlining tour with psychobilly/punk band The Goddamn Gallows, with additional support from stoner/psych riffers The Atomic Bitchwax and classic metal revivalists Worshipper on most dates.

Windhand announced a headlining tour, including one leg with Devil Master and one with Serial Hawk.

Fotocrime is the goth solo project of Coliseum frontman Ryan Patterson, and he's set to follow his 2018 debut album Principle of Pain with South of Heaven on March 13 via Profound Lore. Today, he released first single "Love Is A Devil" and announced a tour, including a run with recent Prosthetic Records signees Fool's Ghost, the dark, ethereal duo of Nick Thieneman (Young Widows, Breather Resist) and Amber Thieneman (Liberation Prophecy, Sandpaper Dolls). That run hits NYC's Gold Sounds on 4/2 and Mercury Lounge on 4/3. All dates (including shows with HIDE and Primary) here.

--
OVERDRIVE and DEALER this weekend in NYC (official aftershows for Sacrifice)

Those shows at Vitus are the official aftershows for the Sacrifice shows at Market Hotel: 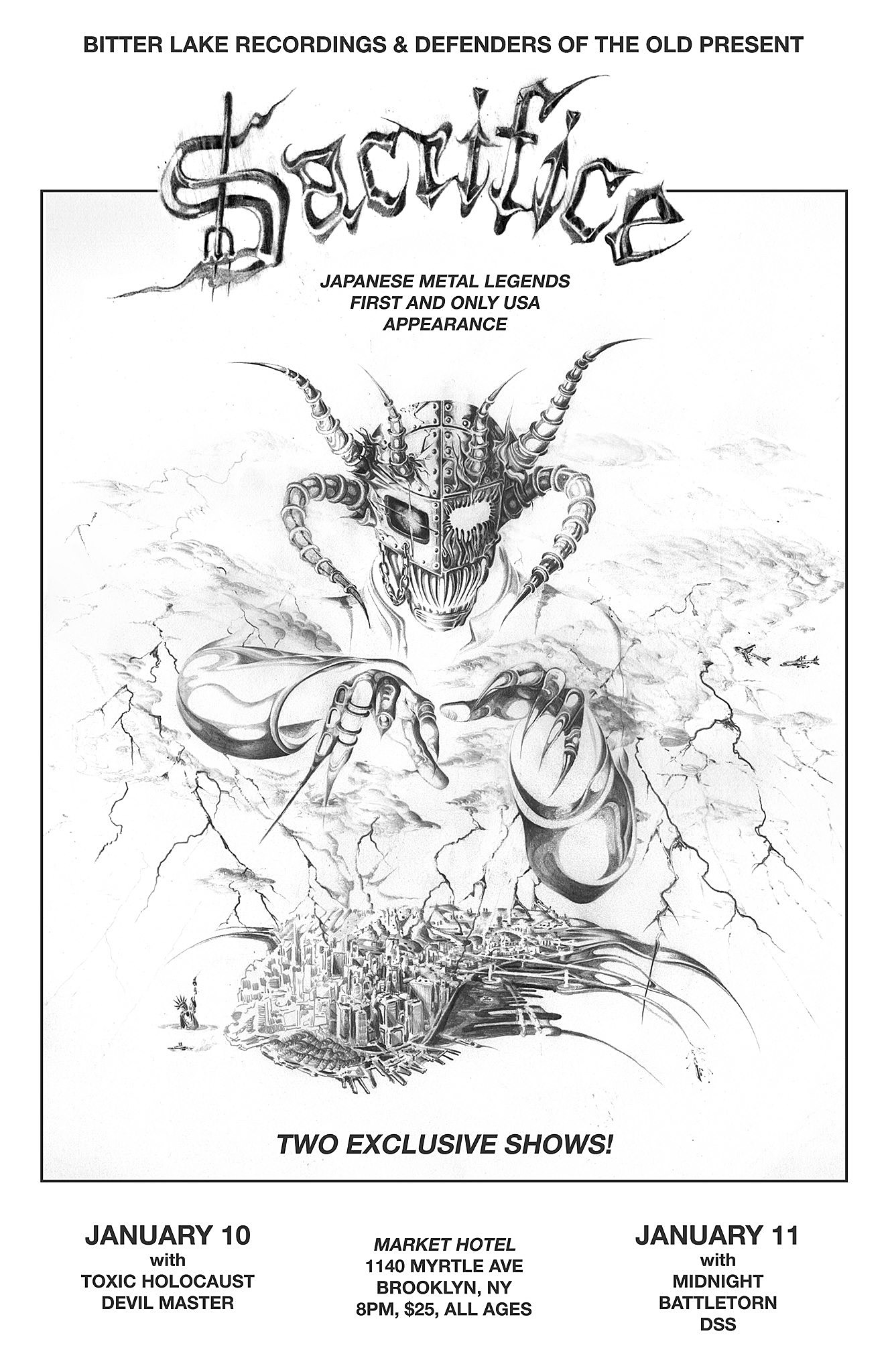