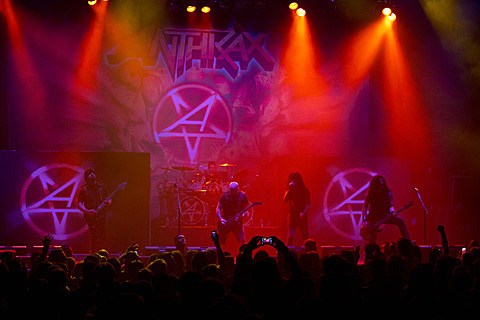 The Metal Alliance tour returns for its third year, this time roping in thrash legends Anthrax to play all of their 1987 favorite, Among the Living, alongside sets from High on Fire (who recently played Bowery and MHoW), Exodus, Municipal Waste and Holy Grail. The North American trek kicks off in Las Vegas in March, heading West and eventually to the East Coast to conclude with a date at Irving Plaza on April 20. VIP tickets for all dates, which include a multitude of goodies, are already on sale. Regular tickets go on sale January 11.

UPDATE: High on Fire is confirmed to play Roadburn 2013, which directly conflict with 4/18 and 4/20... yes, NYC. According to a statement from the festival, the Roadburn appearances will NOT be cancelled, which means that NYC and the tail-end of this tour is more than likely not part of High on Fire's routing. Developing.

UPDATED AGAIN: High on Fire will not play April 15th through the end of the tour. That includes NYC.

Head below for the full slate of dates, as well as a stream of Among the Living in full (via Spotify).