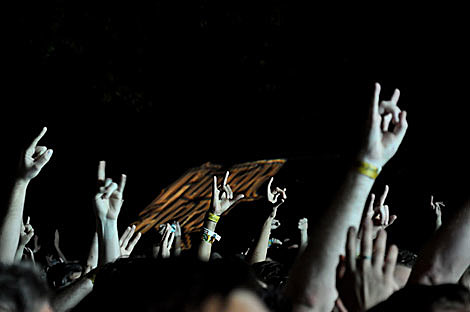 "European Summer Vacation, part 2,347 will end on August 2, so that can only mean one thing ... more dates in the U.S. and Canada! We just rocked Austin at SXSWand are super psyched that we'll be back in North America visiting our friends in the Fall as the World Magnetic Tour keeps rolling on. We had an amazing time on the last run in '08 and early '09 and we are so ready to do it again!

Tickets go on sale either April 4 or April 11 - please see dates below and keep watching here for more information about on sale times and support acts." -Metallica

Love turned to hatred for Metallica long ago, but lately that's turned into something in the middle which is a mix of my love/hate, and their classics-filled setlists. I figured I shouldn't miss the opportunity to see them at the small-for-them venue that was Stubb's during SXSW, but then I didn't try very hard to get in, and I ended up just listening to most of it from the street with lots of other people (many of whom were singing along to good ones like Master of Puppets). The only other venue I would probably make an effort to see Metallica at again, is Madison Square Garden in NYC, which is where they're playing on November 14th (thx Joe). All tour dates below...