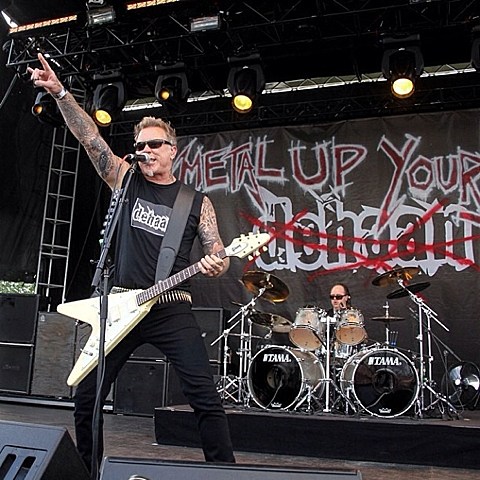 While Governors Ball was going down in NYC, another festival, the Metallica-headlined/curated Orion Music + More Festival went down in Detroit. (They happened at the same time last year too, but last year they were both in the NYC-area). Like last year, some bands played both festivals (Japandroids, Foals), and there was some other killer stuff like the fact that it was one of the few dates on the Rocket From the Crypt 2013 reunion (related band, Hot Snakes, played last year's Orion fest).

But most interesting was the surprise Metallica had in store for those in attendance. Last year, they headlined both days, performing Ride the Lightning and Black Album in their entireties each respective night, but this year, they weren't billed to perform any specific album. However, the "mysterious" band Dehaan, billed for Saturday (6/8) at 4:45 on the Damage Inc. stage ended up being none other than Metallica performing their 1983 debut album, Kill 'Em All (30th anniversary!) in its entirety. Rolling Stone writes:

James Hetfield walked out as if to introduce this "band from Baltimore," but his hints on Instagram earlier in the week had tipped off that something special would be happening.

The no-frills set drew the majority of the crowd to the comparably smaller stage, tucked into the corner of the festival grounds, and all simultaneous stages were briefly suspended to avoid overlap. The quickly surging crowd ate up songs like "Motorbreath" and "Whiplash," and the band delivered the tight, 10-song set without much stage banter, production or hooplah.

Check out videos of the entire Kill 'Em All set and the setlist from Sunday's headlining set, below...