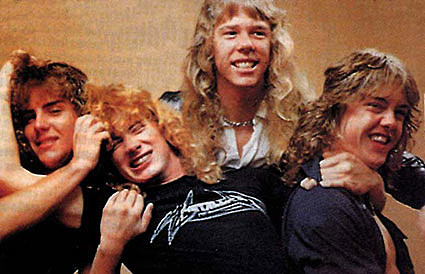 They say you shouldn't kick people when they're down, but what if they're already kicking themselves? Guns 'N Roses announced that the new GNR track "Shackler's Revenge" from the right-around-the-corner Chinese Democracy will premiere in the Harmonix Music Systems video game Rock Band II due this September.

The band's decision to officially introduce material from their sixth album via a computer game is an unusual one, but it's a move likely to become more popular as the industry begins to recognise just how important music-related video games are. Since its launch in 2007, Rock Band has won several industry awards and netted its developer Harmonix Music Systems $208 million. Music by the Rolling Stones, Bon Jovi and the Who is currently available on the first version of the game, which allows players to form a virtual band and play along to famous songs. Like its rival Guitar Hero, the music video game has found success by tapping into the long-established history of air-guitar playing among music fans into a competition with an all-star soundtrack. [Guardian]

The news came days before Metallica announced that their entire upcoming album, Death Magnetic (as in a magnet to your coinage) would be available for download/play on Activision's Guitar Hero III. GnR and Metallica still feuding after all these years..... and what's more metal than feuding via corporate synergy?

Metallica's Death Magnetic was produced by Rick Rubin, an encouraging sign considering hewhoshallnotbenamed has produced every album since ...And Justice For All. (Sorry guys, I do have an eensy teensy glimmer of still ridiculously skeptical faith.)

In other news that would make Cliff spin is his grave, Death Magnetic will be released in a collectors edition Coffin box set (where have I seen that before?) with a CD of demos, a DVD detailing making-the-album, a limited edition (natch) tee, a flag, guitar picks, and a fold out poster. The "Coffin" is in addition three other releases on their Mission: Metallica website. I think I'll go for that fan-friendly 5LP set, what about you guys?

Metallica recently played all the classics at Bonaroo.