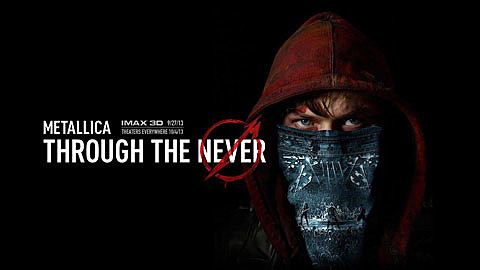 Like Paul McCartney before them, Metallica is playing the Apollo! More details on the 9/21 SiriusXM show and the film they're realeasing around the same time, below....

Metallica will perform songs from their 30-plus year career, and the concert will air live nationwide on the band's limited-run SiriusXM channel, Mandatory Metallica, days before the release of the band's upcoming 3D feature film Metallica Through The Never, which will be released exclusively in IMAX theaters in North America on September 27 and wide on October 4.

"With historic performances from James Brown to B.B. King to Ray Charles and all that came before us, this will definitely be a memorable night for Metallica, our fans and those listening on SiriusXM," said guitarist Kirk Hammett. Bassist Robert Trujillo added, "With its rich musical history the Apollo Theater and its legacy are totally unparalleled and we can't wait to perform there this September."

"Metallica is a band of unquestioned influence, whose body of work spans decades and whose musical style is literally a music genre unto itself," said Scott Greenstein, President and Chief Content Officer, SiriusXM. "We are so excited to bring this private performance only to our subscribers nationwide. Listeners will also have access to Mandatory Metallica, the channel we've created with the band to showcase their iconic music."

Listeners will have the opportunity to win tickets to the event through dedicated listener emails as well as various call-in promotions across SiriusXM's diverse music, talk and sports channels. SiriusXM subscribers can enter for the chance to win tickets starting August 22, 2013 and, starting September 10, 2013, can enter for the chance to win a trip to New York City to see the concert. See Official Rules at www.siriusxm.com/MetallicaLive.

Currently in its 79th year, the legendary non-profit Apollo Theater is known for launching the careers of countless iconic performers, and has been a catalyst for artistic excellence and innovation since it opened its doors in 1934. The Apollo's new artistic vision builds on its legacy and new Apollo programming has music as its core, driving large scale and more intimate music, dance and theater presentations. For more information, visitwww.apollotheater.org.

BrooklynVegan "Blog Radio" airs on SiriusXM U every Wednesday.