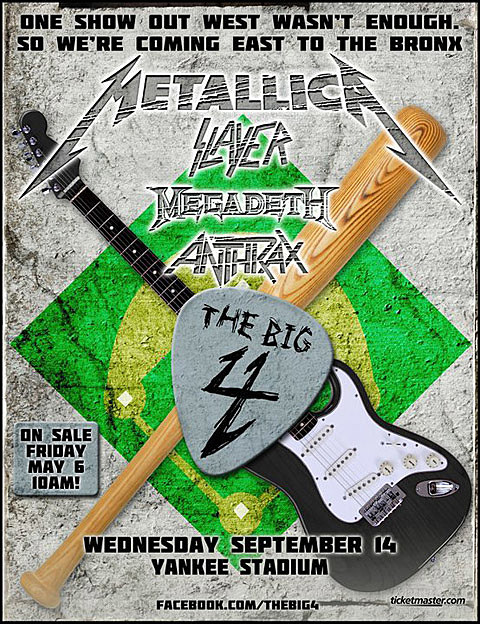 They hit the west coast last weekend, and now "The Big 4" will make the journey east for their second show together in The Bx. Metallica, Slayer, Megadeth & Anthrax will play Yankee Stadium on September 14th. According to Metallica's site, "tickets go on sale Friday, May 6 at 10:00 AM via www.ticketmaster.com. Met Club members should log in for more information about a special pre-sale starting on Wednesday, May 4. Yankees season ticket holders will have their own pre-sale, also on May 4, starting at noon."

Hopefully by the time the NYC show rolls aroundm Slayer will have founding member Jeff Hanneman back in the fold, though he did made a brief appearance in Indio last weekend...

Slayer hit the stage and even the sun appeared slightly scared as it sank behind the mountains. They were the hardest and most relentless band of the day. Dave Lombardo's double bass drums were thunderous, not so much supporting but propelling the music as Kerry King delivered frequent guitar-shredding solos...They played a new song "America" (sp?) that fit right alongside the classics. As he has been since February, Gary Holt of Exodus sat in for guitarist Jeff Hanneman who is suffering from necrotizing fasciitis in his arm. To the crowd's great delight, Hanneman appeared and played during the last two songs of the set, "South of Heaven" and "Angel of Death". -[Seattle Post-Intelligencer]