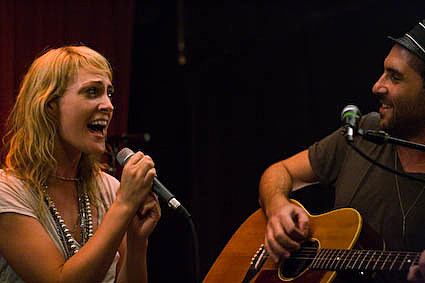 Following 2005's [album] Live It Out, Metric returns with their fourth full length studio album Fantasies. Written by the band in a farmhouse outside Seattle and by frontwoman Emily Haines while on a soul-cleansing sojourn to Argentina, Fantasies is a densely textured modern mix of psychedelia, electro, and rock with a "really big and really dreamy" sound, says guitarist/co-founder Jimmy Shaw.

Haines adds, "For me, the major influences on the record were the places we wrote it: Bear Creek, this utopian farmhouse studio, and then our own studio in Toronto, which definitely brought in the electro, dance and rock elements because the city feels so good right now and so many of our musician friends were around. And then for me, being in Buenos Aires, most of the songs I brought to this record came out of being in exile with just a piano and a guitar. And then in the final stages, mixing at Electric Lady in NYC brought everything around to where we first met Josh and Joules."

Fantasies will be available in the US April 14

I think that mixing they're talking about happened back in September which is why Emily Haines was in town to play those Brooklyn shows at Union Pool. They'll be in NYC again this June, when Metric headlines the much larger Terminal 5. Tickets for the June 17th show go on sale Friday at noon.

You can pre-order Fantasies now at their site. Pre-orders include an "immediate digital download of 3 tracks, including the album version of Help I'm Alive PLUS two exclusive pre-order tracks: a cover of Pink Floyd's Nobody Home and the acoustic version of Gimme Sympathy."

The new album tracklist, a video for one of the new songs, and all tour dates, below...