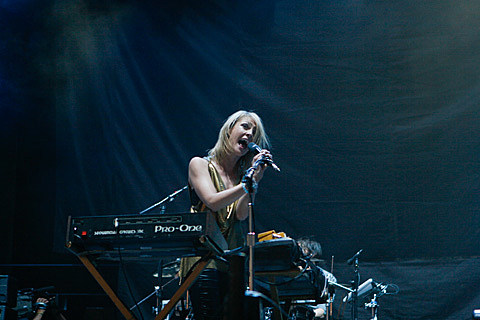 In Metric's own words:

For the past week, Metric has been sharing clues with fans about "Youth Without Youth," the band's first single from the forthcoming album, Synthetica (MMI/Mom+Pop). We've seen mysterious video footage from the recording studio, heard Emily Haines and Jimmy Shaw speak on the making of the song, and even saw fan interpretations of "Youth Without Youth" after the song's lyrics and sheet music were unveiled and before the song's release (relive the experience at www.ilovemetric.com/youthwithoutyouth).

Lastly, Metric has announced an extensive US tour for the Fall. Every ticket purchased for a headlining show comes with a download of "Youth Without Youth" (to be delivered to your inbox shortly after purchase) as well as a digital copy of Synthetica and 5 Synthetica Reflections tracks, to be delivered on June 12.

Now on pre-sale, Metric's tour includes a 9/23 show at Radio City Music Hall which goes on general sale soon (date TBA). Meanwhile we also have a pair of tickets you can win! Details on how to enter, with all tour dates, and a stream of the new song, below...

---
======================
For a chance at winning a pair of tickets to see Metric at Radio City Music Hall: either tweet something that includes both @BrooklynVegan AND "Metric" in the tweet, or send an email to BVCONTESTS@HOTMAIL.COM with the subject line "The D". Include your first and last name in the email. We'll pick a winner at random and contact them with more details. If you enter by email, it will not be shared with anyone else. Good luck!
======================