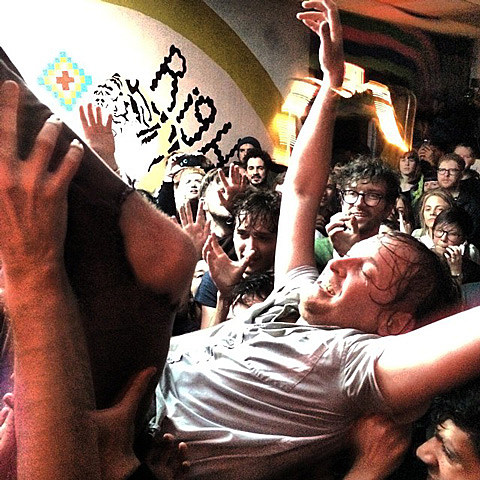 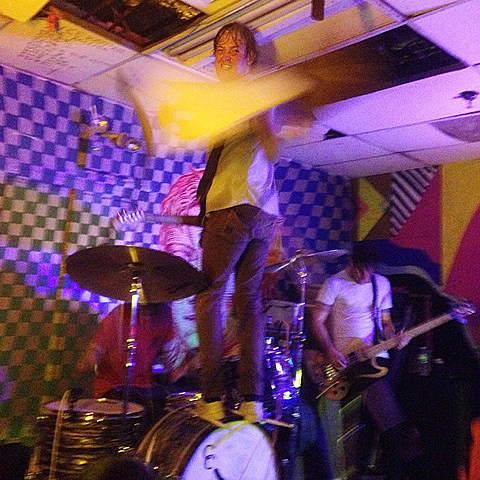 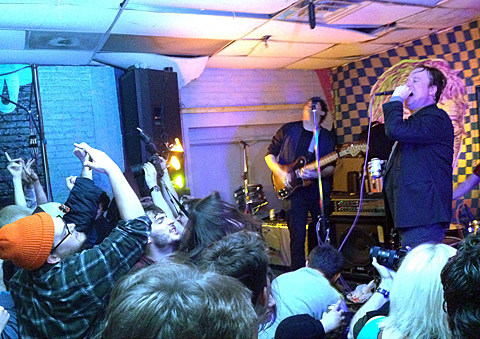 It is cliche and hyperbole to say a band destroyed a place, but it's a very apt word for what Toronto's METZ did to Death by Audio last night as the venue's "Top Secret!" headliners for the penultimate show at the DIY venue. At one point, vocalist/guitarist Alex Edkins pulled down one of the ratty tiles from the drop ceiling and flung it at the crowd. "Think about where you are right now. Think about where you'll be next week," Edkins told the crowd. "Make it count." The crowd and the band (who played their first NYC show at DbA) were amped and sweaty and a lot of shoes were in the air, mostly still attached to feet. They also dropped a killer cover of The Damned's "Neat Neat Neat." A crazy, amazing set -- video from it is below.

Another band that drove a long way just for DbA's next-to-last show were Detroit's Protomartyr, who's first NYC show was also at DbA (opening at Parquet Courts' Light Up Gold release party.) Sardonic as always, frontman Joe Casey greeted the crowd with "This place is great. I predict a long future." Showbooker, soundman and all-around sweet guy Edan Wilber (who was wearing a homemade "NO HINTS LET'S PARTY" shirt) asked then band to play some deep cuts from early 7"s (like "Baseball Bat" from their Colpi Proibiti EP), which made for a punkier, harder-hitting (if less familiar) set. Protomartyr also played a new one last night for the first time. A short clip of that, and full video of a couple other songs, below. 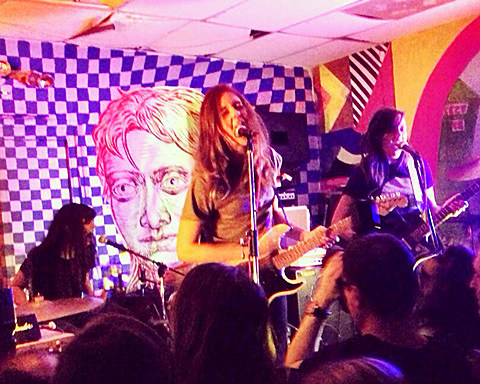 Memphis quartet Nots, who seemed likely to play, were a little late for their set -- their van broke down outside of Cleveland. They managed to fix it, drove straight to the show, climbed through the stage window and immediately started their set, which was their NYC live debut. (Nots, however, feature members of Coasting and Ex Cult who have played DbA tons of times.) The band's snarling, aggressive sound is definitely punk but they're not afraid of synthesizers either. (They would fit in well with the Melbourne, Australia bands that have cropped up around Total Control's Mikey Young.) They were awesome. There's video of most of their short set below and you can catch Nots again in Brooklyn at Palisades on Sunday (11/23).

Predictions that Shellshag would open this, the second-to last-night, were incorrect (nice diversion, Screaming Females), and in fact was opened by Brooklyn's Sleepies which count at least one DbA employee as a member. Video from their set last night is below too. They also fit in well with the night's postpunk/sludgepunk lineup. This was a just about perfect Death by Audio show, with most of the folks inside seeming like regulars who were not disappointed to learn it was METZ and Protomartyr playing, not, say, DOA and Interpol or whatever. While everyone knew there was just one night after this, just about everyone seemed to be very very happy they were there. 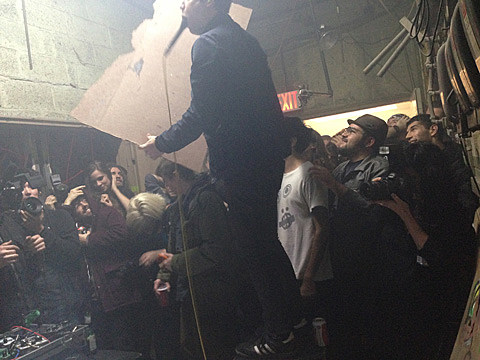 After METZ finished sometime around 1 AM, more secrets unveiled themselves in the form of late night noise/drone sets in "the ranch" / Death by Art part of DbA, including Greg Fox (Liturgy/Guardian Alien), Dubknowdub, and Fuckton which features both DbA's Matt Conboy and Edan Wilber, along with Travis from Grooms and Jay from French Miami/Grooms/Immaculates/Roya. Smoke machines and strobes were cranked to 11 and the night ended around 3:30 AM, properly weird.

Tonight (11/22) is the last night of Death by Audio. As to who's playing tonight, Edan and Matt are offering no clues today on DbA's website, only saying, "Thanks for everything! Seriously! See You Tonight!" For guesses... anyone who's expecting some giant band tonight doesn't understand Death by Audio very well. Sure, Future Islands, Thee Oh Sees, Dan Deacon, Les Savy Fav, and Ty Segall can all play places much, much bigger but their roots are at places like DbA who supported them from the start. Will there be cool, crazy surprises? Undoubtably. But they'll be things that make sense within what they've always done and who they've supported over the years. Which is what made DbA special.

Video (by Unartig) and more pics/instagrams from Death by Audio's penultimate night, below...

Wow, way to go out with a 💥 Death by Audio

SLEEPIES is the first band for tonight's DBA show. 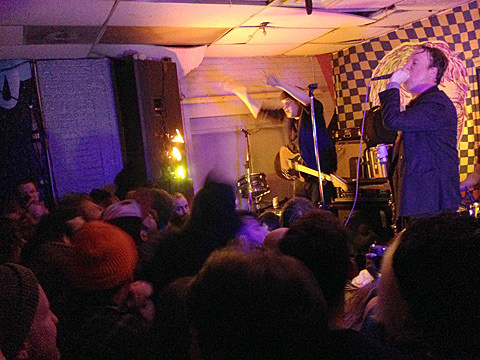 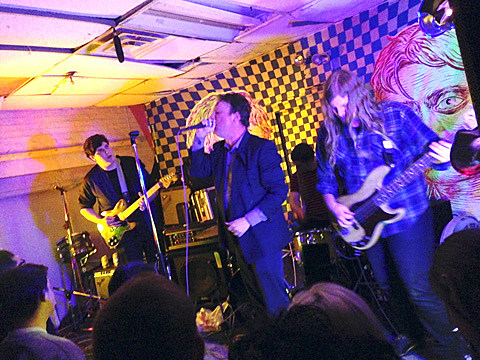 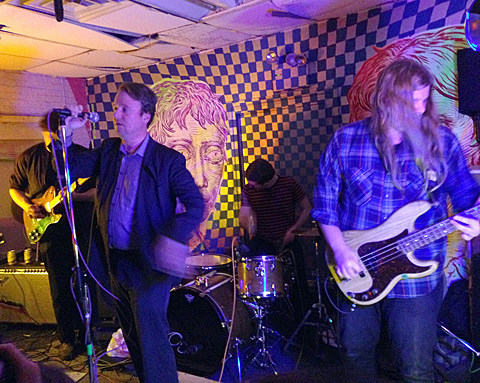 Sure, the lead singer of Protomartyr looks like he had a bad day on Wall Street, but their sound is totally legit. 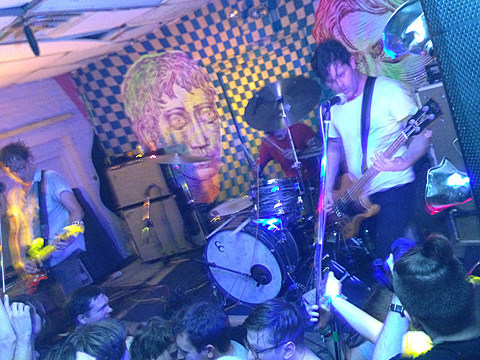 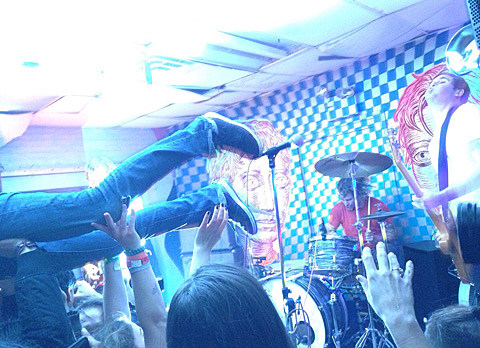 Oliver from A Place to Bury Strangers tending bar at the DbA afterparty. One night left.

Liturgy etc drummer Greg Fox laying down beats at Death by Audio afterparty in "the Ranch". Only one night of DbA left! 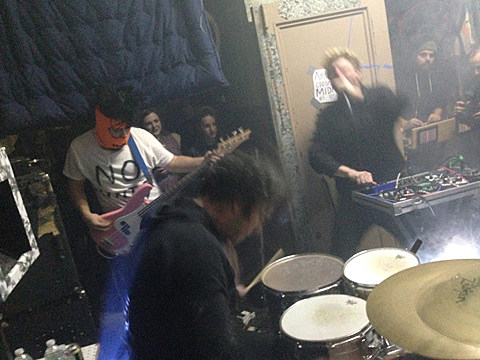 No hints. Fuckton in the back hall #ripDBA 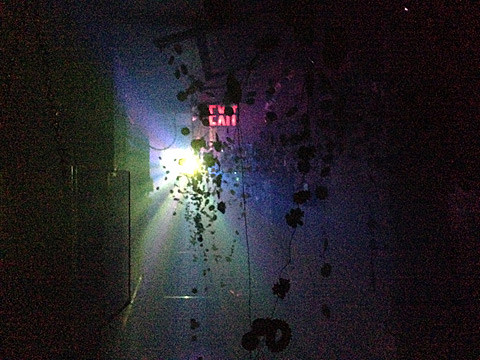