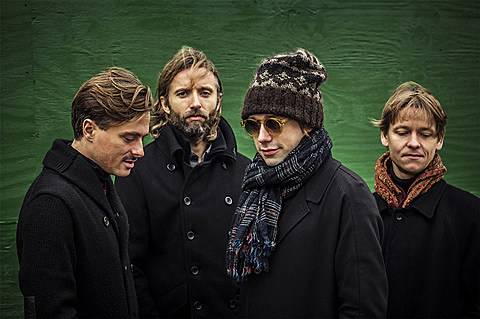 Danish proggy space rock outfit Mew have shared another song off their new album +/- (Plus Minus) which is out April 28. "Water Sides" shows off the band's more ethereal side and you can let it wash over you below.

Mew will be in the US next week for SXSW where they'll play a handful of shows, including the BrooklynVegan Day Party on Saturday, March 21 at Red 7. We'll be at Red 7 for three days from March 19 - 21 and we'll be announcing full lineups and details of all our SXSW day parties soon.

Mew's first SXSW show will be at the Fader Fort for a special preview event on Tuesday (March 17) that will show off the high-def streaming technology they'll be using to webcast all of this year's Fader Fort performances. These will be the first concerts ever to be streamed in 4K HD, so claims the press release. In other news, the Fader Fort is an official, invite-only event this year at SXSW, much to the chagrin of party-hardy spring breakers looking for endless free beer.

Still no word on any non-SXSW shows in North America for Mew, but stay tuned. All known dates are listed, along with the new song stream, below.