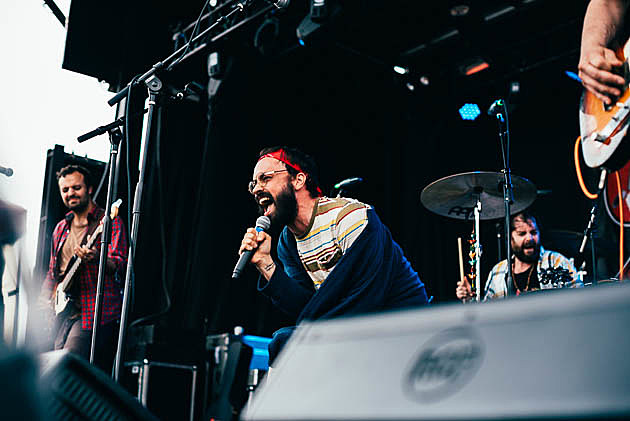 mewithoutYou are a week away from releasing their sixth album, Pale Horses (due 6/16 via Run for Cover), and now they're streaming the whole thing ahead of its release. We mentioned how lead single "Red Cow" most immediately recalled their great 2006 album, Brother, Sister, and that's pretty much the approach that all of Pale Horses takes. Brother, Sister was the transitioning point from their heavy post-hardcore beginnings to their whimsical folk rock period, keeping their earlier roots intact on songs like "Wolf Am I! (And Shadow)" and "Nice And Blue (Part 2)" while introducing what was to come on "Messes of Men" and the "Spider" trilogy. Similarly, Pale Horses combines elements of both of those sounds, and it does so without sounding like a trip back to 2006.

Like Brother, Sister, the new album opens with a soft song, "Pale Horse," before kicking things up a notch on track two, "Watermelon Ascot." They get quiet again on "Dorothy" and "Magic Lantern Days," loud again on "Mexican War Streets" and the epic 6+ minute closer "Rainbow Signs." But more often than not, Pale Horses has them sounding like the band who wrote "January 1979" and the band who wrote "Every Thought A Thought of You" on the same song. Aaron Weiss is often switching from his sung vocals to his speak-shouted ones, and the guitars are back and forth between eccentric clean-toned patterns and crushing distorted ones. If you're already a fan of the band, you probably don't need my or anyone's suggestion to listen to this record. But if you're new to them, it's the kind of music that Fugazi, Radiohead and Neutral Milk Hotel fans could all agree on (that may sound far-fetched, but this band really is diverse). And if you're into the comparatively newer (and by now, probably more popular) band La Dispute but haven't checked out mwY, this is a must-listen.

The band's previously announced tour with Foxing and Field Mouse will have them in NYC this summer for a show on July 17 at Bowery Ballroom. Tickets for that show are still available.

Updated list of tour dates and the new album stream (via Noisey) below...