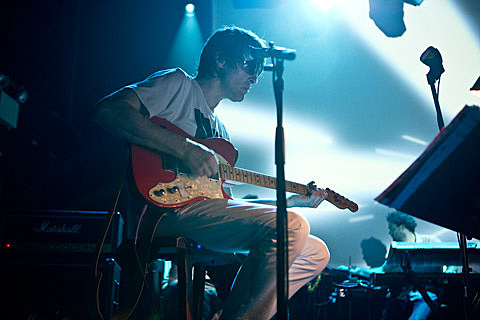 Last week, we mentioned that Brooklyn label Mexican Summer would be throwing a fifth anniversary party in Red Hook (like Captured Tracks just did in Bushwick). It's since been announced that the festival will take place at Pioneer Works on October 11 and 12 and the lineup includes Ariel Pink (who just played Station to Station), the US debut of New Zealand's Connan Mockasin (who was supposed to play Station to Station, but dropped off), Spiritualized (who just played Webster Hall), Tamaryn, The Fresh & Onlys, No Joy, Quilt, Co La, Lilacs & Champagne, Happy Jawbone Family Band, Weyes Blood, Mike Wexler, Home Blitz, '80s-era cult psych-folk legend Bobb Trimble (who played NYC a couple times in the past year or so), '70s-era cult psych-folk legend Linda Perhacs (who makes her NYC debut at the show!), and Soldiers of Fortune (aka the "supergroup" of Papa Crazee, Mike Bones, Matt Sweeney, Barry London, Brad Truax, and Kid Millions, who will be doing a 2 hour jam sesh with special guests).

The fest also features an out-of-retirement performance by Lansing-Dreiden, the arty band led Jorge Elbrecht now of Violens. L-D only played a handful of shows in their original incarnation.

Various ticket options are available now online and at Brooklyn's Co-Op 87, who will also have a pop-up store at the festival.

In addition to the festival, Mexican Summer is also celebrating their five-year anniversary with a new book. A press release states:

Accompanying the book is a 10" record of exclusive collaborations from Bay Of Pigs (Spiritualized, Soldiers of Fortune and Neil Hagerty), Jorge Elbrose (Jorge Elbrecht and Ariel Pink), Autre Ne Veut and Fennesz, Bobb Trimble and Quilt and The Lonely Sailor and Renée Mendoza Haran (members of Total Control, Lace Curtain and Ashrae Fax.) This music is exclusive to the book and will not be available digitally.