MGMT at All Points West 2009 (more by Tim Griffin) 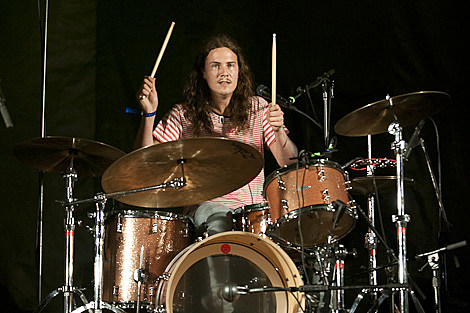 "Rockers MGMT have become the latest act to end a gig early because of a missile attack - drummer Will Berman stormed offstage at the band's Manchester, England show on Sunday night, September 26 after he was hit in the torso by a glass of urine.

The group were midway through hit song "The Handshake" towards the end of its set at the Manchester Apollo when the incident happened, prompting angry Berman to stop drumming and walk off. Even his bandmates were unaware of what had happened. They had to ask fans, "Where's Will gone?" The group was forced to end their show without a drummer. They did not return for an encore. -[Aceshowbiz]

As Pitchfork reports, the story, though posted on Ace Showbiz as true, might as well be considered an unconfirmed rumor at this point, but it's a nice rumor to have around, and hot on the heels of the Kings of Leon pigeon and Axl Rose bottles show-ending incidents, so why not. MGMT dummer storms off stage after being hit by piss (maybe). And it was Dan Deacon who threw it at him (maybe).