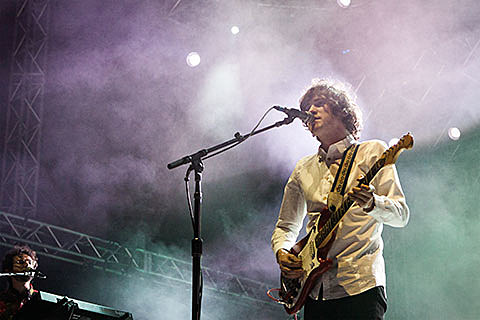 As discussed, indie-pop-turned-psych-weirdos MGMT are currently on a tour which brings them to NYC for a huge show at Barclays Center on December 13 with Dinosaur Jr. and Kuroma (fronted by a member of MGMT's live band). Tickets for that show are still available, but we're also giving away a pair. Details on how to enter to win are below.

If you're wondering what to expect from this ever-changing band at the Barclays Center show, this review on Memphis Flyer of Saturday's Orpheum Theatre show sheds some light:

You wanted to hear their big hits, like "Kids," "Time To Pretend," and "Electric Feel?" Score.

You wanted to hear the trippy stuff like "Siberian Breaks" and "Of Moons, Birds & Monsters?" Score.

You wanted to hear material from the new album? Score.

MGMT's set list broke down cleanly, with 6 cuts from Oracular Spectacular, 5 from Congratulations, and 5 from the newest album, MGMT.

You could use those numbers as a guideline and come up with many permutations of set lists, but MGMT elected to play their most accessible material. So they didn't play "4th Dimensional Transition" but they did play "Weekend Wars"; they didn't play "Lady Dada's Nightmare" but did "Flash Delirium"; didn't play the 2nd half of MGMT but did the first half.

Looking at the nightly setlists they've been posting on Instagram, they do change the order up from show to show. Speaking of their instagram, they're running a contest on it where you can win a chance to play the giant cowbell during "Your Life Is A Lie" on stage with them.

In other Dinosaur Jr. news, J Mascis recently teamed up with Fred Armisen to cover TLC's "Waterfalls" at Berklee Performing Arts Center, which you can watch a video of below. J Mascis also just teamed up with Sharon Van Etten collaborator Doug Keith (not long after teaming up with Sharon Van Etten herself) to contribute a guitar solo to "Pure Gold In The 70s" off Doug's upcoming LP, Pony (due out 2/11). You can listen to that (via SPIN) below too.

Updated dates are listed, along with contest details, video and song stream, below...