MGMT at the Guggenheim in 2011 (more by Kurt Christensen) 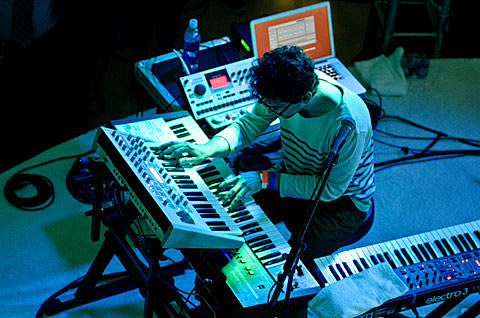 One of my most anticipated releases on Record Store Day was "Alien Days," the new single from MGMT's forthcoming album, which was released exclusively on cassette. I've always maintained that MGMT's under-appreciated sophomore album, Congratulations, was a superior release to its predecessor and the hope that time will treat it in a Pinkerton sort of way. On that album, MGMT deeply explored strange dimensions of psychedelia and art rock, and on "Alien Days," they take that exploration even further. It's got a kind of Bowie-esque acoustic rock thing going on at first, which is taken on a trip through effect-laden space rock and swirls of acid-dripping thrum. You can stream the song below. Details on the album title and release date are still TBA.

As mentioned, MGMT have some live dates scheduled this year, and they've just expanded their itinerary to include a NYC-area show happening on June 20 at Wellmont Theatre, right before they head to Dover, DE for Firefly Music Festival. Tickets for the Wellmont show go on sale Friday (4/26) at noon.