WHERE IS OBAMA AT (one of Bao's photos, altered by JB) (sorry Diplo) 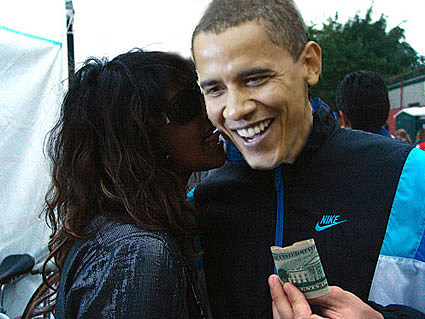 No sooner does British/Sri Lankan rap goddess M.I.A. announce her engagement to WMG head Edgar Bronfman's son, rock guitarist Benjamin Brewer, then she reportedly collects $100k for a performance at an MTV Movie Awards after-party in West Hollywood sponsored by Target and Converse One Star. After the half-hour performance, M.I.A. (real name Maya Arulpragasam) jumped on top of a photo booth and told the audience how much she'd be making. "I'm going to use it to build schools in Liberia," said the politically active hip-hop performer. "It costs $52,000 to build a school for 1,000." The show wrapped up with the performer inviting women onstage to dance to "Paper Planes," including Jessica Szohr, Jessica Stroup and Rumer Willis. What, no Lindsay Lohan? Ahhh, the rich and famous in Hollywood.
[Hits Daily Double via Daily Swarm]

$250 tickets are still available for the show M.I.A. is playing at MoMA on on June 10th. "The evening will also feature a DJ performance by 'Special Disco Version' featuring James Murphy and Pat Mahoney of LCD Soundsystem." That's at least one more school right there.

M.I.A.'s June 6th show at McCarren Pool with Holy Fuck is sold out, but the one Holy Fuck is playing later that night isn't.