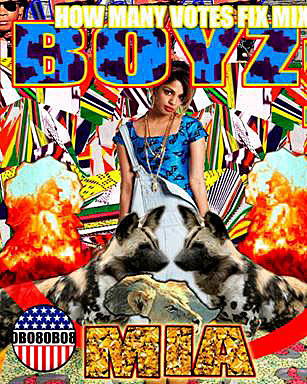 "Everyone's a winner now, we're making that fame/Bona fide hustler, making my name."
As it turns out, "Paper Planes" is no mere smash, it's also a proven prophecy. Over a year after the release of Kala, M.I.A.'s playful boast has become reality.
BANG! BANG! BANG!

The BANG! press BANG! release BANG! is continued below... 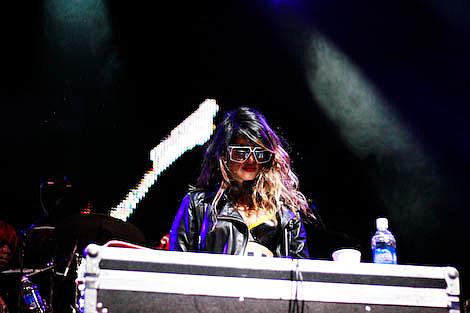 The ever-ascending single "Paper Planes" is propelling M.I.A. up from the underground and into that tip-top-tier reserved for worldwide phenomena. In 2007, Kala landed on virtually every critic's list in existence, earning #1 accolades from both Rolling Stone and Blender. In 2008, "Paper Planes" has climbed into the top 5 on Billboard's Hot 100 Singles chart, topped the iTunes singles chart, both feats fueling the steady rise of Kala back up the album chart. She's now reached those rarified heights that every artist aspires to: the intersection of critical acclaim and superstardom.

If the world has woken up to M.I.A., so have her musical peers. Hip-hop artist T.I. teamed up with rap elites Kanye West, Jay-Z, and Lil Wayne, sampling a portion of "Paper Planes" into his own track, "Swagga Like Us." M.I.A.'s magic mojo appears to have rubbed off, as T.I.'s new album Paper Trail recently debuted at #1.

Reenergized, re-recognized, and reverberating worldwide, M.I.A. will release the How Many Votes Fix Mix on iTunes October 28th (and everywhere else November 4th.) The Digital EP will feature a remix Boyz featuring Jay-Z as well as two unreleased tracks: "Shells" and "Far Far."

And as the world takes to Kala, M.I.A. takes on the world-literally. This past August, Maya Arulpragasam (aka, M.I.A.) partnered with non-profit organization Youth Action International and opened the rebuilt and renovated Becky Primary School in Liberia. New additions include more classrooms, a library, computer labs, and a new playground. Plus, free tuition for its 625 students. She also launched her own clothing line, featuring T-shirts, jackets, and hoodies of her own design.

M.I.A. started her own label, N.E.E.T., which stands for Not in Education, Employment, or Training. Her first signing is Baltimore's own Rye Rye, whose debut album is due early next year.

As the clock ticks its way toward 2009, the twilight of the first decade of this century has been claimed by M.I.A.-philanthropist, designer, label head, superstar...

M.I.A MIA/BLAQSTARR WAY DOWN IN THE HOLE

Me and Blaqstarr found the image at the end from a Joy Division video and thought about the election and thats how people want you to see the world , black/ white , good/ evil, jesus/devil
for you the words are Obama vs Mc Caine for me its terror vs genocide
simple maths so we put it on at the end to show how far we've gone and how far we've come, i have to start staying at home more because i dont think i can fit through my front door anymore but i want this to do the traveling for me.

That last part is from her MySpace.