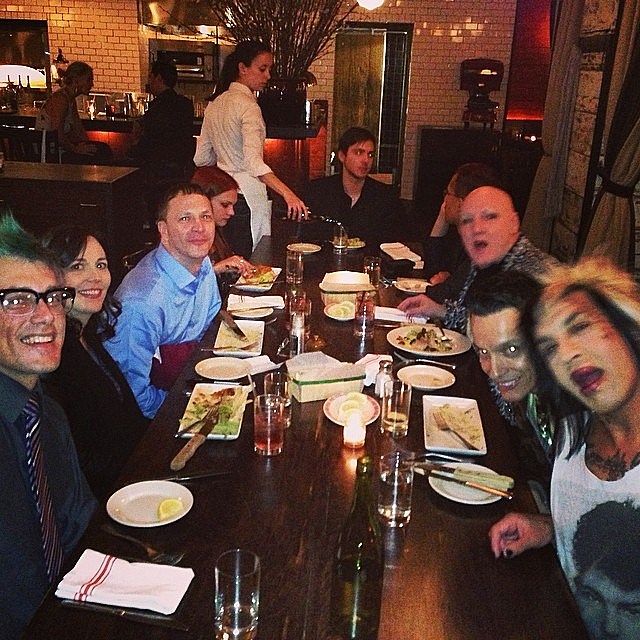 Only out of jail for a few hours and already Michael Alig is surrounded by a posse of club kids once again, but this time around they're all over the internet, blurry and in real time (no more waiting for next month's issue of Project X or Paper Magazine to catch a glimpse). There's Alig pictured above at dinner with Scotto and Astro Erle (who were among those who picked him up at jail) and old pal James St. James, who earlier published a fun open letter to Michael at the WOW Report. Here's an excerpt:

Viral videos, blogs, GIFs, memes - there's a whole world waiting for you online. But the internet is a scary place. Things get weird fast. I suggest dipping your feet in slowly. Gently. Here are a few fun, soothing videos to get you going: David After Dentist, The Prancercize Lady, Charlie Bit Me, Sweet Brown, Two Girls One Cup...

Technology develops at light speed now, you don't want to get left behind. You NEED a smart phone, a computer, a DVR, and a tablet. There are no two ways around this. And be sure to keep up on all the latest upgrades and gadgets. You don't want to be like me. I still have an iphone 4. Its calculator is an abacus. My Grindr only has Pilgrims in my area who want to hook up. It's OLD.

Things we don't need any more: Phone books, dictionaries, maps, and encyclopedias. They're all in your phone. IT'S CRAZY.

Things it takes awhile to get used to not needing anymore: Photographs, books, and newspapers. You'll fight this, but eventually you'll succumb. It's a paperless world now. Adapt or die.

Read it all HERE. Follow along at James St. James's Instagram where he's already proclaimed they're on their way to... grindr.