Ernie Glam and Michael Alig on the Pee-ew 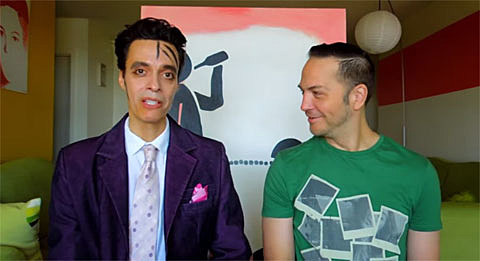 The Pee-ew is the name of notorious 'Party Monster' club kid Michael Alig and his old friend Ernie Glam's YouTube talk show. It launched less than a year ago (not very long after Alig was released from prison), and they released their 201st episode today. Each episode is a mix of gossip, humor, current news, personal stories and old club stories. Sometimes they have special guests, like club kid DJ Whillyem who will be selling some of his vintage t-shirt collection via Michael's online store.

Fans of the podcast, Alig groupies, your mom, your kids and you can now also experience the podcast and Michael in the flesh at the WOW Cafe Theater in NYC this summer. Tickets are on sale for live tapings happening throughout June and July.

Meanwhile, Michael has managed to reach an even bigger audience this week with appearances on both CNN and Fox News, as a PRISON EXPERT. Both networks interviewed him on the air to discuss how Richard Matt and David Sweat could have escaped from the upstate New York maximum-security prison. The Fox appearance was last night. Gawker reports:

Alig, whose life as a club kid-turned-killer was documented in the 2003 movie Party Monster, was released from the Mid-State Correctional Facility in May 2014, though he supposedly spent some time at Clinton while serving his 17-year sentence. On last night's episode of The Kelly File, he discussed prison culture, the noise in Clinton that could mask otherwise audible signs of escape, and how the two could have preyed on Clinton employee/suspected accomplice Joyce "Tillie" Mitchell, whom Alig assumes has low self-esteem.

Watch the Fox News appearance and episode #187 of the Pee-ew where Alig and Glam discuss Suzanne Bartsch's return to Le Bain at the Standard Hotel, club invitations that look like drugs, and the recent RBMA-presented Storm Rave, below...

The Pee-ew #187: The Storm Rave and On Top parties